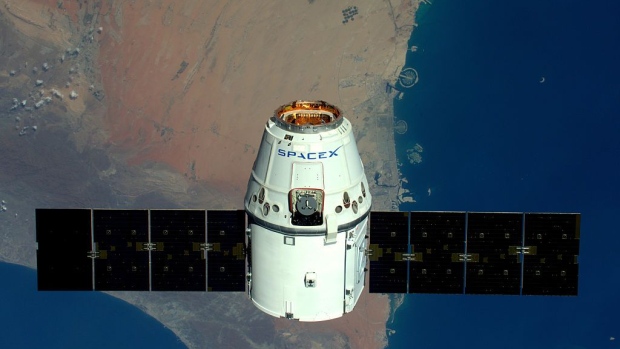 IN SPACE - APRIl 10: (EDITORIAL USE ONLY) (NO SALES) This handout image supplied by the European Space Agency (ESA), shows a view of The Palms, Dubai as the SpaceX Dragon spacecraft psses below, in an image taken by ESA astronaut Tim Peake from the International Space Station on April 10, 2016. ESA astronaut Tim Peake is performing more than 30 scientific experiments and taking part in numerous others from ESA's international partners during his six-month mission, named Principia, after Isaac Newtons ground-breaking Naturalis Principia Mathematica, which describes the principal laws of motion and gravity. (Photo by Tim Peake / ESA/NASA via Getty Images) , Photographer: ESA/Getty Images North America

(Bloomberg Opinion) -- Last week, the European Space Agency reached out to to warn Elon Musk’s Space Exploration Technologies Corp. that one of its satellites might collide with a SpaceX communications satellite. When ESA first raised such concerns in late August, the chances of a crash were 1 in 50,000; SpaceX had said then that it didn’t think the risk was high enough to justify action. Now the odds had narrowed to 1 in 1,000. Yet ESA received no reply.

Eventually the space agency unilaterally moved its satellite out of the way when it was barely half an orbit away from SpaceX’s. Company officials later explained that they'd failed to respond because of "a bug in our on-call paging system." In short, they'd missed the message.

For most of the six decades since humans first launched satellites into space, the risk of such collisions has generally been low. They’re now rising rapidly, thanks to the growth of commercial space companies and the desire of more and more governments to exploit space. As last week’s snafu suggests, self-regulation by countries and companies may no longer be sufficient to manage those risks. Spacefaring nations urgently need protocols to manage Earth orbit as the shared, limited resource that it is.

Since 1957, humans have launched at least 9,000 satellites into orbit. Roughly 5,000 are still up there; a couple thousand remain functional. And satellites make up just a fraction of the manmade objects orbiting the Earth. The U.S. Air Force and other organizations are tracking at least 19,000 additional pieces of space junk, including debris from collisions, anti-satellite tests, and rocket launches. Then there are the millions of pieces of metal, some as small as a millimeter, that can cause significant damage to satellites when colliding at speeds exceeding 17,500 miles per hour.

As far back as the 1970s, scientists had begun warning that the proliferation of satellites would increase the chances of orbital collisions. These days, operators of satellites and other spacecraft regularly maneuver around other objects in orbit. Since 1999, the International Space Station has had to shift course than two dozen times to avoid space junk.

The problem is going to expand rapidly in coming years as SpaceX and other companies launch "mega-constellations" of hundreds and even thousands of small and medium-sized communication satellites into low-Earth orbit. SpaceX has plans to create a constellation of as many as 12,000 satellites, with the first 60 launched last May. Among these was the one ESA worried about running into last week.

Companies and governments aren't oblivious to the challenge. As far back as 2011, reinsurance giant Swiss Re AG acknowledged debris as a satellite insurance risk. SpaceX is taking several steps to address the issue, including placing its mega-constellations in low-altitude orbits so that dead satellites will fall out of orbit and burn up on their own. Both the U.S. and the European Union are considering requiring that any new satellites be able to do the same automatically in the event of problems. The United Nations Committee on the Peaceful Uses of Outer Space has issued voluntary guidelines on debris mitigation.

Even so, only 30 percent of satellite operators are adhering to guidelines that they bring satellites out of orbit after 25 years. Meanwhile, a host of new spacefaring nations may or may not feel obligated to abide by U.S. regulations or UN guidelines written before they took flight. Worse, as the SpaceX-ESA incident proves, there's no internationally recognized air traffic control agency or protocols to regulate Earth orbit. The global community lacks even a legal definition of "space junk," much less agreed ways and means to pay for its removal.

Reaching a global consensus won't be easy. Earth orbit has both civil and military uses, and the lines that divide them are often unclear and contentious. Nonetheless, a somewhat similar challenge was met in 1944, when 52 countries established the International Civil Aviation Organization, a UN body that sets global safety norms for civil aviation.

A global convention to regulate Earth orbit could have similar, industry-boosting benefits, by laying out protocols for satellite operators to communicate with each other, as well as binding standards for the creation, management and mitigation of space junk. New space powers, including India and Japan, would have a strong incentive to join such an organization, if only as a means to encourage nations such as the U.S. and Russia to clean up the messes they’ve already created. As the heavens become more crowded, leaders on earth are going to have to work together to keep them safe.

To contact the author of this story: Adam Minter at aminter@bloomberg.net

To contact the editor responsible for this story: Nisid Hajari at nhajari@bloomberg.net

Adam Minter is a Bloomberg Opinion columnist. He is the author of “Junkyard Planet: Travels in the Billion-Dollar Trash Trade” and the forthcoming "Secondhand: Travels in the New Global Garage Sale."