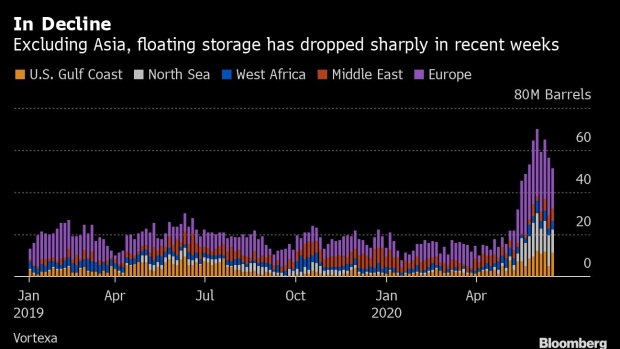 (Bloomberg) -- An oil trade that made its way into Donald Trump’s press briefings -- and earned big profits for commodity merchants and tanker owners alike -- is fading away with every dollar that the price of crude rallies.

When oil demand cratered earlier this year because of the coronavirus and a flood of cargoes, the U.S. president talked about “oil all over the oceans.” It was a reference to the tens of millions of barrels of unwanted crude that traders were hoarding on ships at profit. Tanker owners including Frontline Ltd. and Euronav NV also reaped windfalls as a frenzy to book the ships on storage charters drove up rates.

Those days are done. The big financial incentive to store, known in trader jargon as contango, has all but vanished. Worse still for tanker owners: it’s disappeared partly because the OPEC+ oil-producer alliance has drastically curtailed the supply of cargoes. In other words, no incentive to store and fewer shipments.

“For now, this play is largely over,” said Richard Matthews, an analyst who monitors the trade at E.A. Gibson Shipbrokers Ltd. “Quite simply the contango is no longer there, so it does not make any economic sense to enter into a new floating storage trade, unless the deal was locked in when the contango was sufficient to cover freight costs.”

Crude oil can effectively be bought and sold months, even years, in the future. When demand crashed in March and April as cities across the world entered lockdowns and halted their transport systems, the most-immediate cargo prices slumped to deep discounts relative to later ones. That is the structure known as contango. If they could store the oil cheaply enough, and sell it later when prices were higher, then traders could make several dollars per barrel of profit.

For a brief period earlier this year, Saudi Arabia -- frustrated by reticence of other countries to cut their output in the face of collapsing demand -- responded by pumping as much crude as possible. That meant a huge number of cargoes that had to be transported or stored if they weren’t needed.

That helped lift daily earnings for supertankers above $250,000 a day on the industry’s benchmark Saudi Arabia-to-China trade route -- an extraordinarily high level historically for the ships, according to data from the London-based Baltic Exchange.

Then Saudi Arabia’s policy changed completely and the kingdom led a global alliance of producers who collectively removed about a tenth of output from the global oil market.

The contango quickly disappeared and, as of Thursday, day rates stood at just below $22,000. The amount of oil that’s being held in floating storage excluding Asia -- logistical constraints are hampering cargo unloading in China -- has begun to drop sharply.

Owners are now pinning their hopes on rising oil demand to restore the flow of cargoes.

“All eyes on when the OPEC barrels start to return,” said Brian Gallagher, investor relations manager at Euronav.

About 40 to 50 supertankers that were previously storing could rejoin the market to compete to transport cargoes over time, he said. That’s likely fewer than some analysts have estimated, so the impact on freight rates from their return might be smaller than some market watchers anticipate.

Robert Hvide-Macleod, the boss of Frontline’s management unit, is confident that, while inventories on land and sea will drop, rising oil demand will reverse the slide in rates.

“Oil volumes are down tremendously in recent months and freight rates have suffered accordingly – but we expect the current level to mark the low-point,” he said. “The return of oil demand and volumes to the market is key.”

Not everybody’s confident that the oil flows will recover to a sufficiently high level to drive rates up. The full 9.6 million-barrels-a-day cut by the Organization of Petroleum Exporting Countries and its allies will last to end of July. Then it goes to 7.7 million in August. That’s still a huge amount for the tanker market to absorb.

While there’s been a quick rebound in oil demand, the total amount of trade still looks likely to be lower than it was before the coronavirus struck for at least several months to come.

Jet fuel demand alone stood at about 10 million barrels a day before the virus. Even if consumption of the product recovered to 70% of its pre-pandemic level, that would still ultimately translate into a huge reduction in the amount of crude required. And usage of other petroleum products, such as gasoline and diesel, still remains lower than it was.

Then there’s the return of ships from storage to consider.

“The fallout from floating storage unwind is clear,” said Jonathan Chappell, an analyst focusing on marine transportation equities at Evercore ISI. “The return of capacity to the spot market, coupled with meeting oil demand with localized offshore stocks will create a pain trade for tanker markets, the duration of which will completely depend upon the pace of an oil demand recovery.”