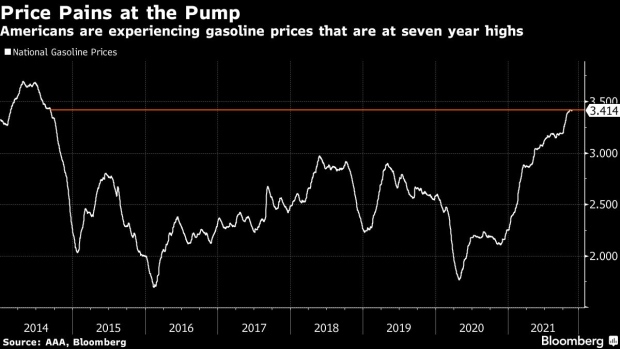 Traffic travels on Highway 101 in San Francisco, California, U.S., on Wednesday, Nov. 25, 2020. The U.S. Centers for Disease Control and Prevention issued a travel advisory last Thursday urging people to skip Thanksgiving travel and celebrate only with those in their households, and after the U.S. recorded over 1 million new cases in just the first 10 days of November. Photographer: David Paul Morris/Bloomberg , Bloomberg

(Bloomberg) -- President Joe Biden is working hard to do something about the sky-high gasoline prices facing Americans. But it’s already too late to lower costs for travel over Thanksgiving.

All eyes in the oil market have been on Biden to see whether his administration will announce a release from the national Strategic Petroleum Reserve in a bid to keep energy costs under control. But even if those extra crude barrels hit the market today and sent futures down, it would likely be another seven to 10 days before that would fully show up at the pump for consumers, said Patrick DeHaan, head of petroleum analysis at GasBuddy.

That means travelers will be stuck with high prices, just as driving for the holiday is expected to reach close to pre-pandemic levels.

National retail prices of gasoline are averaging $3.41 per gallon, the highest in seven years, according to AAA data. More than 53 million Americans are set to travel for the Thanksgiving holiday, with 90% opting to travel by car.

“Drivers should expect elevated pump prices as they hit the roads for the holiday” Devin Gladden, a AAA spokesperson, said by phone. “Anything short of an immediate increase in supply is unlikely to have an impact on prices in time for Thanksgiving.”

Biden’s Oil Price Approach Is Working, and He Hasn’t Even Acted

An eventual SPR release would most strongly impact crude prices, that is, unrefined oil. It remains to be seen how strongly that would influence prices at the pump.

“Oil has a strong impact on gasoline spot prices, but it’s not always a 100% relationship,” said DeHaan of GasBuddy.