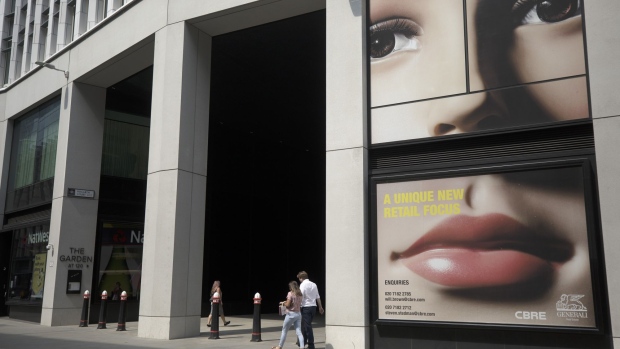 Pedestrians pass an Assicurazioni Generali S.p.A. advertisement on office windows in the City of London in London, U.K., on Wednesday, Aug. 12, 2020. The U.K. economy suffered more than any major European nation during the coronavirus lockdowns, piling pressure on the government to ensure the withdrawal of its support programs doesn’t derail the nascent recovery. , Bloomberg

The two Italian billionaires who are challenging Mediobanca SpA’s decades-long grip over Assicurazioni Generali SpA want Italy’s largest insurer to focus more on asset management, as they draw up their plans ahead of a battle for control in the spring.

Construction magnate Francesco Gaetano Caltagirone and Leonardo Del Vecchio, the founder of eyewear giant Luxottica, are preparing a plan for Generali to counter the one that will be presented by Chief Executive Officer Philippe Donnet on Dec. 15, a person familiar with the matter said, asking not to be named discussing private information. As well as boosting asset management, Caltagirone and Del Vecchio want a bigger role within the group for Banca Generali SpA, according to the person.

The two magnates have been building their stake in Generali for months, with an eye to ousting Donnet, who is up for renewal with rest of the board on April 29. They aim to present their own list at the upcoming AGM to challenge the one prepared by Donnet and the current, Mediobanca-backed board, the person said.

The two billionaires contend that Generali, Italy’s biggest insurer, has lost its way under Mediobanca’s watch, lagging behind its main European main peers over the last 15 years. Together with ally Fondazione Cassa di Risparmio di Torino, they now own more than 15% of Generali, well above Mediobanca’s 12.8%.

Mediobanca boosted its stake to more than 17% via a stock-lending mechanism in September, to respond to the billionaires’ stake-building and in preparation for the board renewal battle. The legitimacy of the lease, which will expire right after the AGM, is under review by Italy’s market regulator Consob.

Earlier that month, the two billionaires had announced they were joining forces in a shareholder consultation pact, with the goal of working together toward “a more profitable and effective management” of the insurer. Fondazione CRT later entered the pact.

Caltagirone, Generali’s vice chairman, has long complained about the insurer’s strategy and declined to approve the company’s 2020 results, a symbolic move that underscored his disagreement with some executives.

Del Vecchio and Caltagirone have also been boosting their stakes in Mediobanca, to more than 19% and 3% respectively, according to Bloomberg data.

The billionaries say that under the current management, Generali has ceded ground to European peers such as Allianz SE and Axa SA.

They also contend that the insurer’s acquisition policy has been too timid and beholden to Mediobanca. For example, Generali refrained from bidding for asset management opportunities to avoid competing with its largest shareholder. Generali accounts for about a third of Mediobanca’s income.

A showdown is set for the day Donnet presents his strategic plan. He will be able to point to his record of boosting Generali’s share price, cutting costs and pushing digitalization. He has expanded into more lucrative product areas while cementing Generali’s presence in its home market by taking over smaller rival Societa Cattolica di Assicurazioni SpA.

Generali shares have gained more than 60% since Donnet presented his first business plan in November 2016, compared with a 30% increase at Allianz and 15% at Axa SA.