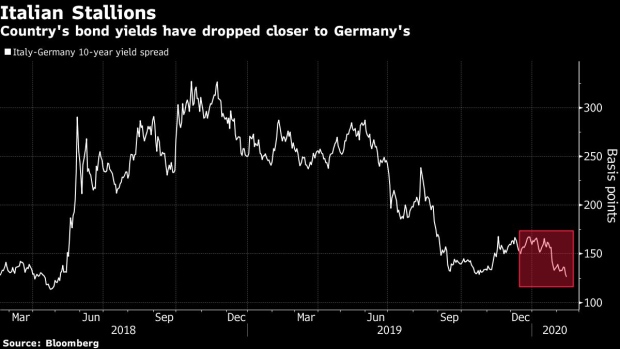 Italy’s 10-year yield spread over Germany -- a key gauge of political risk in the country -- fell to 126 basis points Thursday, the lowest level since May 2018. While a successful debt auction proved the key catalyst and investors simply can’t get enough of Europe’s peripheral debt, it’s also a reflection that politics in Rome has got a lot calmer in the past six months.

The demand for the so-called BTPs contrasts with last summer, when the spread widened as Salvini withdrew support to the government and called for snap elections -- raising the prospect of the euroskeptic politician becoming prime minister. Since then, Italian bondholders’ fortunes have taken a turn for the better, while those of the far-right leader have slipped.

“With the long-end BTP supply behind us and the seemingly calmer political backdrop, the hunt for yield is very much alive and kicking,” said Martin van Vliet, a strategist at Robeco Institutional Asset Management. “A near-term government collapse is less likely.”

Salvini is now set to face trial for stopping migrants from landing in Italy. His League party is still performing strongly in polls but he lost a key vote and a guilty verdict could hamper his chances to run for prime minister in the future.

Italian 10-year bond yields were hovering just above the record low of 0.75% set in September 2019. The spread over bunds has narrowed by 34 basis points this year.

To contact the editors responsible for this story: Dana El Baltaji at delbaltaji@bloomberg.net, Anil Varma