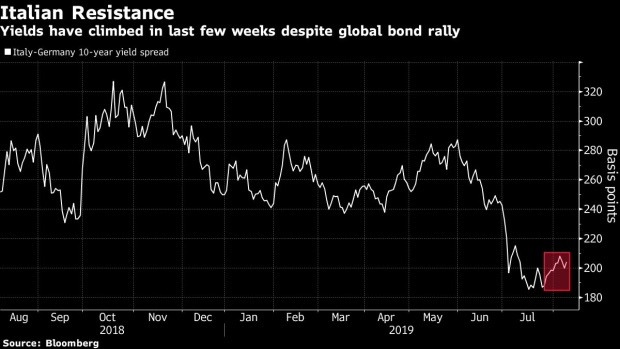 (Bloomberg) -- Italian bonds declined after a report that Deputy Prime Minister Matteo Salvini is threatening to bring down the government unless his demands for changes in the cabinet are met.

The 10-year yield premium over Germany, a key gauge of risk in the Mediterranean nation, climbed toward the widest level in a month. The newspaper Corriere della Sera reported that Salvini has given Prime Minister Giuseppe Conte until Monday to replace some cabinet members including Finance Minister Giovanni Tria, who is seen as a brake on the coalition’s spending plan.

“It was Salvini saying if he doesn’t get his own way, the coalition isn’t for him,” that drove Italian bonds down, said Lyn Graham-Taylor, senior rates strategist at Rabobank International. “We like tighter peripheral spreads.”

The sell-off underscores the fact that investor sentiment toward the populist government still remains fragile, even after a global hunt for positive yields fueled a rally in the nation’s bonds in recent months. While the 10-year debt of peers such as Portugal and Spain now yield close to nothing, Italy’s still offers a yield of 1.5%.

To contact the editors responsible for this story: Ven Ram at vram1@bloomberg.net, Anil Varma