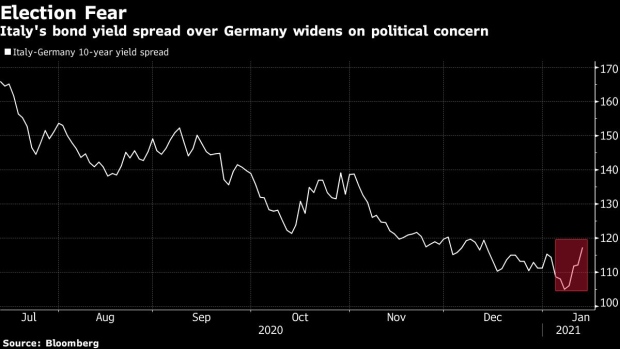 The national flag of Italy, center left, flies alongside the European Union (EU) flag from the Palazzo Chigi, the headquarters of the Italian government, in Rome, Italy, on Thursday, Aug. 29, 2019. Giuseppe Conte, 55, has been tasked by Italy's president with forming a government supported by the Five Star Movement and the Democratic Party, or PD, two long-time rivals who have little more in common than the desire to avoid snap elections. , Bloomberg

(Bloomberg) -- Italian political concerns are bubbling to the surface for bond investors with a growing risk of fresh elections in the summer threatening to compound the economic uncertainty wrought by the coronavirus crisis.

The nation’s bonds slid Thursday following a report by the country’s ANSA newswire that the Democratic Party, part of the ruling coalition, sees a risk of fresh elections in June. Bank of America Corp. says that could widen the country’s 10-year yield spread over Germany -- a key gauge of risk -- to 140 basis points, the highest since November.

“All government scenarios are on the table,” wrote Bank of America strategists led by Erjon Satko in a note to clients. A further selloff could come if “the new government includes euroskeptic elements.”

Italian bonds aren’t just a bellwether for local politics, but also for how investors feel about risk more broadly in the euro area. While the nation’s economy has been hammered by the coronavirus, relative political stability and heavy support from the European Central Bank’s quantitative-easing program has kept a lid on volatility and driven yields lower.

Ten-year yields rose as much as seven basis points to 0.67%, with the spread over those on their German peers climbing to 119 basis points. That was a turnaround from yields dropping to a record low last week, following strong demand for a bond sale.