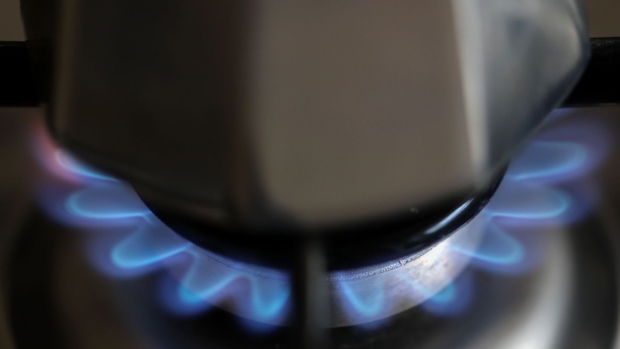 Natural gas burns on a domestic kitchen stove in Rome, Italy, on Wednesday, Dec. 29, 2021. European gas prices declined to near the lowest level in three weeks, with increased inflows at terminals in the region bringing relief to the tight market. Photographer: Alessia Pierdomenico/Bloomberg , Bloomberg

The technology and engineering conglomerate is working on what it calls the Green Circular District, a way to recover the carbon and hydrogen in landfill waste and use it to produce eco-friendly chemicals and fuels.

Some 16 million tons of non-recyclable waste are disposed of in the country’s landfills each year, according to Chief Executive Officer Alessandro Bernini. “We could convert it into syngas in order to reduce foreign energy dependency,” he said in an interview.

“With 10 plants capable of treating 600,000 tons year each, in a five year period those plants could be able to produce domestically 10% of the gas required for the heating and electrical Italian grid as a whole,” he added.

Italy, like much of the rest of Europe, is rushing to stockpile gas ahead of winter, following supply cuts by Russia as regional tensions mount over Moscow’s war in Ukraine. Italy is now reliant on Russia for about 25% of its gas imports, versus 38% prior to the conflict, and seeks to be free of Russian gas by the winter of 2024-25.

Maire Tecnimont can already implement its waste-to-chemicals technology on industrial scale. It hasn’t provided an estimate for its level of investment.

The company, which has a market capitalization of about 890 million euros ($906 million), last month reported first-half net income of 42.2 million euros, up 5.5% year-on-year. Bernini served as its chief financial officer for about a decade before being appointed CEO in May.

Maire also sees its green technology as key to helping reduce emissions. “In the near future this process can contribute to the decarbonization of the steel-making industry,” said Bernini.