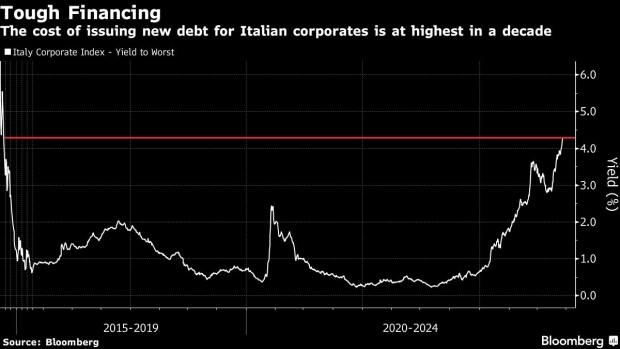 Attendees hold flags during a general election campaign rally by a right-wing coalition made up of Brothers of Italy, Forza Italia, and League parties, in Rome, Italy, on Thursday, Sept. 22, 2022. Italy's right-wing coalition would not seek an overhaul of the country's plan for spending European Union recovery funds, a leading member of the alliance said as investors closely watch Sunday's elections. , Bloomberg

Judging by Italian bond markets at least, investors are unperturbed by the prospect of a right-wing coalition taking power after Sunday’s snap election. But many fear the calm will not last long.

The nation’s debt has been swept up in a broader rout, pushing 10-year sovereign borrowing costs to levels last seen in 2013. But Italy’s yield premium over Germany, a measure of idiosyncratic risk, is still lower than at the beginning of the month, suggesting bondholders don’t expect the closely watched election to cause much upheaval.

Nor has appetite faltered for Italian companies’ bonds, which according to Bloomberg data, have performed less badly than most European corporate peers this year. And just 10 days before the vote, gaming company Lottomatica SpA raised 350 million euros ($340 million) on bond markets, receiving orders three times more than that amount, despite its junk credit rating.

What has kept volatility in check so far is the coalition’s pledge to honor fiscal commitments made to the European Union. The risk is the promise turns out to be hollow and the coalition sharply increases spending. That would jeopardize hundreds of billions of euros in EU funding just as Italy is threatened by a power supply crunch and economic recession.

“If you look at their political program and they end up doing what they say they will, there will be massive fiscal expansion,” said Axel Botte, global strategist at Ostrum Asset Management.

Throw promised tax cuts into the mix, and the public deficit would soon “run foul of previous commitments towards the EU,” Botte said, advising clients to remain short on Italy.

Policies moving away from alignment with the European Union would only add to the list of worries for local borrowers, who are already facing surging inflation and the retreat of central bank support.

A strong hit to Italian junk-rated borrowers could reverberate across the system. In fact, Italian corporates weigh for over 16% of Bloomberg’s European high yield index, more than those of any other country in the continent.

Those fears played out this week in the bonds of construction firm Webuild SpA. They fell more than 4.5 cents on the euro after Giorgia Meloni, likely the next prime minister, told Italian media the EU recovery plan needed fine-tuning.

“We cannot risk transfers being suspended or even stopped,” Webuild Chief Executive Officer Pietro Salini told an industry event this week, urging political leaders to respect the framework and terms of the reform package agreed with the EU.

With high debt, sluggish growth and volatile politics, Italy has long been seen as Europe’s weakest link. And there is plenty of precedent for election-linked volatility -- a 2018 vote that caused concerns for the future of Italy’s euro membership saddled bond investors with the biggest monthly losses since records began.

And after years of easy money, capital is becoming costlier. Money markets see a near 85% chance of a 75 basis-point interest rate hike by the European Central Bank in October. Policy makers are also considering how best to reduce the ECB’s vast balance sheet.

Still, higher borrowing costs would not be an imminent threat for Italy which exploited years of ultra-low rates to lengthen the average maturity of its debt beyond seven years. But borrowing at much higher yields over a prolonged period would eventually take its toll, said Stephane Monier, chief investment officer of Lombard Odier Private Bank.

“Italy has done the the right thing, lengthening the duration of its debt. But it also depends on how the economy goes: if there’s a recession that lasts several years, its situation is much more precarious,” he said.

Monier said he would only consider buying more Italian government bonds if the yield spread over Germany were to pass 300 basis points. It stood at 232 basis points on Friday, more than 10 basis points below two-year highs touched in June.

One factor mitigating investor concern is that the ECB will continue redirecting proceeds from its pandemic-era bond portfolio toward purchasing debt from southern European countries through at least 2024. Its new tool, the Transmission Protection Instrument, is designed to mitigate against unwarranted jumps in borrowing costs for weaker euro zone members.

Still, investors may be placing too much confidence in that backstop. Rather than a bailout facility for Italy, it should be seen as a means to prevent contagion across the bloc, said Ostrum’s Botte.

“They have different views of what Italy should be like,” he said. “We don’t rule out an open crisis at some time, if those parties can’t keep it together.”