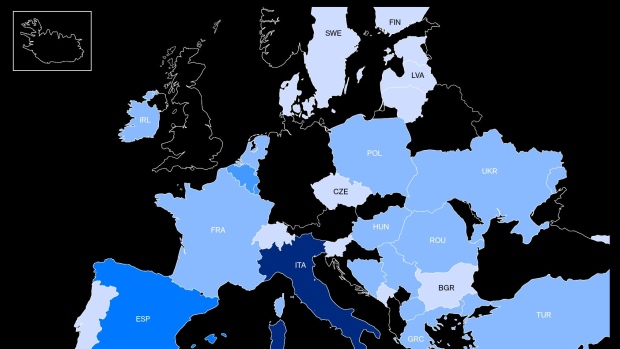 A parliamentary session inside the Chamber of Deputies, the lower house of parliament, in Rome, Italy, on Thursday, Feb. 18, 2021. The recent trend of Italian governments intervening in corporate affairs may have come to an end, after newly installed Prime Minister Mario Draghi laid out his plans in a speech to the Senate on Wednesday. Photographer: Alessia Pierdomenico/Bloomberg , Bloomberg

(Bloomberg) -- Italy’s government plans to request a vote of support for its justice reform plan, and Prime Minister Mario Draghi’s most contentious proposal yet is set to get final parliamentary approval in September.

Minister for parliamentary relations Federico D’Inca is expected to formally request the confidence vote on Sunday. It’s expected to take place in the Lower House early this week, with results as soon as Monday night or Tuesday before parliamentary holidays, according to Italian media.

Earlier on Sunday, Lower House lawmakers agreed that Draghi’s justice reform plan is constitutional, a hint that parliamentary support would also be forthcoming.

The government has already secured support from the cabinet and is widely expected to win the confidence vote from most Lower House lawmakers. All parties apart from the far right Brothers of Italy hold posts in Draghi’s government and support his plan.

Draghi Has Stabilized Italy. His Next Task Will Shape His Legacy

Final approval by the Senate will only take place after the summer-break in September.

“The biggest aim of the reform is to make sure each trial has a sentence as definitive and as quickly as possible,” Cartabia said last week.