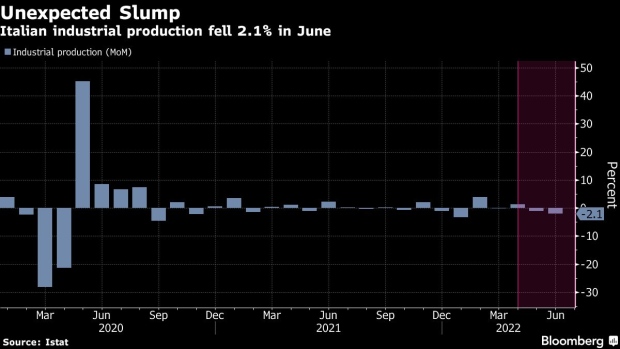 An employee drives a forklift truck on the factory floor at the Effedi Srl factory in Malo, Italy, on Thursday, Oct. 5, 2017. The Most Serene Republic, as the area around Venice was known for a millennium, is now the troubled epicenter of a banking meltdown that’s threatening to derail one of globalization’s great success stories. Photographer: Federico Bernini/Bloomberg , Bloomberg

Output fell by 2.1% from May, declining for a second consecutive month, the national statistics institute said on Friday. Economists forecast a contraction of 0.1%.

Signs of weakening manufacturing point to a loss of momentum toward the end of a quarter when the euro region’s third-biggest economy enjoyed a spurt of growth amounting to 1% of gross domestic product.

The nation is bracing for snap elections in September following the resignation of Prime Minister Mario Draghi, who remains at the head of a caretaker government.

The premier passed a fiscal aid package worth 17 billion euros ($17.4 billion) on Thursday to keep up support for the economy and protect citizens and companies from the worst effects of surging inflation.

GDP data in the three months through June marked the sixth consecutive quarter of expansion. Draghi reckons growth will continue, though uncertainty is increasing.

Machinery and transport vehicles contributed the most to the decline in industrial production falling 2.7% and 6.5% on the month respectively.

By contrast, production in Germany, Europe’s biggest economy, unexpectedly rose in June. It climbed 0.4% from the previous month.