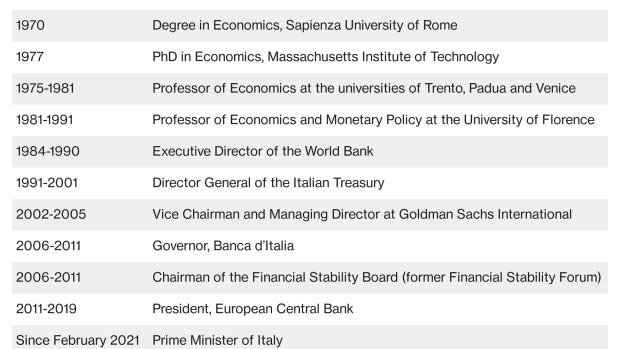 ROME, ITALY - JANUARY 24: Parliamentarians cast their ballot during the first round of voting for the election of the new Italian President at the Chamber of Deputies, on January 24, 2022 in Rome, Italy. The Italian parliament will convene on January 24 to begin voting for a new head of state to replace the outgoing Sergio Mattarella. (Photo by Antonio Masiello/Getty Images) , Photographer: Antonio Masiello/Getty Images

(Bloomberg) -- The first round of Italy’s presidential election yielded no winner as an agreement among parties remains distant.

672 of the 976 ballots cast by lawmakers were left empty, in accordance with the indications of most major parties. No name emerged as a possible front-runner.

Prime Minister Mario Draghi is seen as a favorite to be chosen head of state for the next seven years given his international reputation and pragmatic approach. But parties remain divided on who will lead the government in his place, avoiding the risk of early elections before the parliament’s term ends in 2023.

The second round of voting will take place Tuesday at 3:00 p.m. Rome time, but a winner will probably be chosen only later in the week. During the first three rounds, a majority of 672 votes is needed to elect a new president, and that number drops to 505 from the fourth ballot scheduled for Thursday.

It’s notoriously hard to predict the outcome of Italy’s presidential election: there is no official list of candidates and while all parties are meant to agree on, and vote for, just one candidate, the secrecy of the ballot lends itself to defections.

Read more about the voting process

Besides Draghi, other potential contenders include: former Premier Giuliano Amato and Justice Minister Marta Cartabia, the former head of Lower House, Pier Ferdinando Casini, and the current head of the Senate Maria Elisabetta Alberti Casellati. The re-election of current President Sergio Mattarella remains an option, even if he has repeatedly made it clear he is not interested in a second round.

Draghi has been leading Italy’s post-pandemic rebound since last February, and laying the ground for reforms the European Union demand in order to release about 200 billion euros ($226 billion) of recovery funds. If Draghi becomes president, public administration minister Renato Brunetta would take over as head of government temporarily because he’s the oldest cabinet minister.