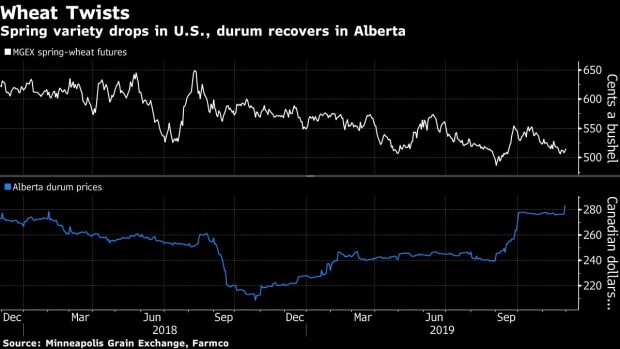 Exports of durum wheat by the U.S. and Canada are booming, foiling efforts by Italy to protect its farmers by adopting country-of-origin labeling rules in 2017, effectively damping imports. EU production of the wheat variety for the season that began in July fell 10% to 7.78 million tons, European Commission data show, triggering demand for North American supplies.

Italian importers took advantage of U.S. and Canadian durum of “excellent quality” at “historically cheap values,” Niccolo d’Andria, vice president of the Rome-based grains group Associazione Nazionale Cerealisti, or Anacer, said in an email. A second round of imports may loom in April, he said.

Exports of Canadian durum to Italy in the two months ended Sept. 30 almost tripled to 156,500 tons from a year earlier, according to the Canadian Grain Commission. Shipments from the U.S. in the nine months ended September more than doubled to 210,000 tons, the most since 2015, U.S. Department of Agriculture data show.

Output in Canada and the U.S. also declined as excessive rain hampered harvests. Farmers also reduced acreage for durum, which can be challenging to grow.

Prices for durum stayed relatively low during the growing season, which contributed to Italy’s demand, Erica Olson, market development and research manager at the North Dakota Wheat Commission, said in a phone interview. “Some buyers were buying early and buying fast based on production and quality issues. The big question is if it will continue.”

Canada “has become the supplier of last resort,” Cam Dahl, president of Cereals Canada, said in a phone interview. “Nothing has changed in Italy. The country of origin labeling provisions are still in place.”

To contact the reporters on this story: Megan Durisin in London at mdurisin1@bloomberg.net;Ashley Robinson in Winnipeg (Non BLP Loc) at arobinson193@bloomberg.net;Michael Hirtzer in Chicago at mhirtzer@bloomberg.net

To contact the editors responsible for this story: James Attwood at jattwood3@bloomberg.net, Patrick McKiernan, Nicholas Larkin