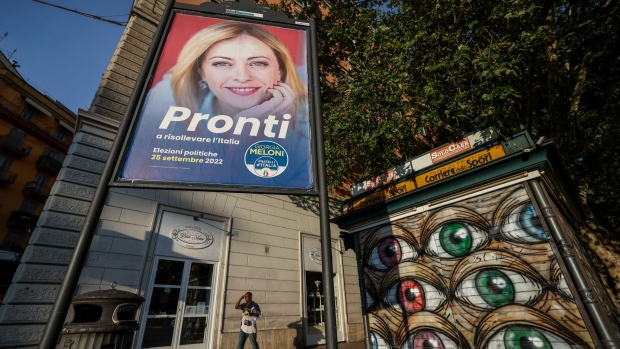 An election poster featuring an image of Giorgia Meloni, leader of the Brothers of Italy party, reading "Ready To Revive Italy", in a residential suburb of Rome, Italy, on Wednesday, Aug. 10, 2022. Italy will hold an early election on Sept. 25. , Bloomberg

(Bloomberg) -- Italy’s far-right Brothers of Italy party, which is leading polls ahead of snap elections next month, is promoting a plan to take Telecom Italia SpA private and sell off the phone company’s assets in a bid to cut its debt pile by more than half, people familiar with the matter said. The shares jumped.

The group would encourage a takeover bid by state lender Cassa Depositi e Prestiti, then sell about 30 million of Telecom Italia’s mobile and landline subscribers to competitors for about 13 billion euros ($13.4 billion), the people said, asking not to be identified because the plan is private. The state would also sell the phone company’s Brazilian unit for about 4 billion euros, they said.

The final goal would be to retain control of the former phone monopoly’s landline network after the disposals and to use the cash to reduce its approximately 30 billion-euro debt pile. The plan is consistent with the Right-Wing Alliance’s political agenda calling for a national “digital sovereignty,” which means keeping Italian state oversight over the country’s most crucial technological infrastructure, according to a party document obtained by Bloomberg.

“Brothers of Italy supports the idea of a technological sovereignty for the country, and we aim at turning around the country’s telecoms industry without wasting public money feeding foreign investors,” said Alessio Butti, a lawmaker responsible for the party’s telecommunications policy. Butti declined to elaborate the party’s full plan saying that leader Giorgia Meloni will decide the timing for it.

Telecom Italia shares jumped as much as 9.1% in Milan on Friday, the most in more than four months.

Telecom Italia bonds gained on the news, with the notes due in 2055 registering an almost 4-cent increase on Friday, its highest in over two years, according to data compiled by Bloomberg. The tranche maturing in 2033 was also up as much as 1.3 cents on the euro to 111 cents.

The strategy would undermine Chief Executive Officer Pietro Labriola’s attempts to sell off the company’s landline network to a group led by Cassa Depositi. Those talks have been hampered by Telecom Italia’s largest investor, Vivendi SE. Vivendi wants about 34 billion euros for the assets, which the phone carrier’s advisers initially valued at around 21 billion euros, people familiar with the matter said earlier this year.

Spokespeople for the Brothers of Italy and Telecom Italia declined to comment. Representatives for Vivendi didn’t immediately respond to requests for comment.

Still, any deal would need approval from shareholders -- Cassa Depositi holds less than 10% of Telecom Italia currently, according to data compiled by Bloomberg -- as well as the European Union. EU regulators would have to approve a move to combine the two companies’ networks given concerns over a possible return to a phone monopoly, people familiar with the matter told Bloomberg earlier this year.

The Brothers of Italy believes that a full takeover of Telecom Italia would be much less expensive than just buying its network, the people said. At current prices, Telecom Italia has a market value of about 4.8 billion euros, excluding debt.

The end-game would stay the same: the combination of Telecom Italia’s grid with rival Open Fiber to build a single, national network. Selling off the other assets would mean Telecom Italia is no longer a “vertically integrated carrier,” and would help get approval from Italy’s competition regulator, the people said.

Brothers of Italy said last week that they opposed a grid sale and favored leaving Telecom Italia with its most valuable asset, the network. The party called for Cassa Depositi to take control of the telecom operator.

Italy’s right-wing coalition -- which is led by Meloni’s Brothers of Italy and includes Matteo Salvini’s League party and former premier Silvio Berlusconi’s Forza Italia -- is leading polls with 46% to 48% of the popular vote. That would give them a landslide victory in the country’s Sept. 25 general elections and allow them to control more than 60% of seats in both houses of parliament, according to a study by Istituto Cattaneo.

Meloni’s coalition would “respect Nato commitments; support Ukraine in the face of the invasion of the Russian Federation; and support any diplomatic initiative aimed at resolving the conflict,” according to the official program of the center-right bloc. It also pledged to respect EU rules while seeking a change in the allocation of European recovery funds.

The Telecom Italia plan is still in the preliminary stages, but will be reviewed by Meloni after elections, the people said.

Separately, advisers for Cassa Depositi are reviewing a non-binding bid for Telecom Italia’s network under the current grid spinoff plan, two people familiar with the matter said. The multi-billion dollar offer, initially expected for the end of August, could be delayed until after the vote, they said.

Earlier this year, Telecom Italia and Cassa Depositi signed a memorandum of understanding aimed at starting the process to combine the phone company’s grid with Open Fiber. KKR & Co. as well as Macquarie Group Ltd. also signed. The deadline for the agreement was set for Oct. 31.