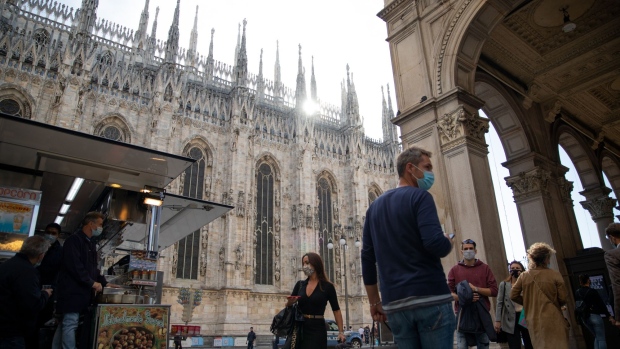 (Bloomberg) -- Italy’s government approved next year’s draft budget, which seeks to extend measures to support the economy amid a resurgence in coronavirus cases.

The “strongly expansionary” budget will focus on the health sector, measures to support families and the extension of a moratorium on loan and mortgage payments, the government said in a statement Sunday.

The draft budget sets aside 4 billion euros ($4.7 billion) to support the sectors hardest hit by the coronavirus crisis.

Italy reported a record 10,925 new infections Saturday, with 47 deaths. Prime Minister Giuseppe Conte’s government may soon approve new restrictions on public life, according to government officials, who asked not to be named in line with their policy. The resurgence in Italy, Europe’s original epicenter for the virus, is following the paths of France and Spain, where outbreaks has been accelerating in recent days.

The government said in its budget outlook that in a worst-case scenario gross domestic product could fall 10.5% this year and expand only 1.8% in 2021. The administration’s current forecast is for a 9% contraction this year and 6% growth in 2021.

Rome is set to receive the lion’s share of European Union recovery fund grants and loans, as much as 209 billion euros over the course of the program, and Conte’s government is due to discuss with the European Commission how he plans to use the money.

The government is expected to announce new measures including earlier closing hours for bars and restaurants and limits on sporting activies as early as Sunday.