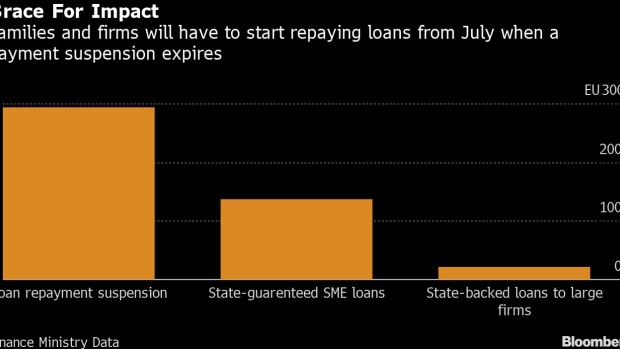 A closed restaurant in the Vittorio Emanuele II Galleria in Milan. , Bloomberg

(Bloomberg) -- Italy may ask state-owned asset manager AMCO to handle a mounting pile of government-backed soured loans issued to support businesses during the pandemic, according to people familiar with the matter.

The government guaranteed almost 150 billion euros ($179 billion) of bank loans to small and medium-sized companies through a fund managed by Mediocredito Centrale SpA, a state development bank which is indirectly owned by the finance ministry. When an emergency suspension of loan repayments starts being lifted in the next several months, banks are likely to lean on state guarantees and transfer the risk to the fund.

Unlike MCC, AMCO has years of experience in buying and managing bad loans, having played a key role in helping clean up piles of bad debt accumulated by Italian banks during the last financial crisis. It currently manages 34 billion euros in non-performing loans.

Handing over the management of the loans to AMCO, which is also owned by the finance ministry, will also allow companies struggling to keep up with loan repayment to receive new financing and reduce bankruptcies, the people said, asking not to be identified because the discussions are still private and no final decision has been made. Representatives for AMCO and the Finance Ministry declined to comment.

Italy expanded state guarantees on bank loans in March 2020, seeking to avoid economic catastrophe as the pandemic shuttered businesses. Lending to the private sector in January was 4.3% higher than a year earlier and KPMG estimated in February that Italian banks could face as much as 100 billion of euros of new non-performing loans this year.

A sudden surge in defaults on loans held by Italian banks could trigger a credit crunch, just as the economy seeks to recover from the pandemic slump. At the same time, the Italian state is already contending with a heavy debt load, forecast by the International Monetary Fund to reach 158% of gross domestic product by the end of this year.

“The end of moratorium will increase the role of state, which has to manage billions of guarantees released amid the pandemic,” said Domenico Torini, a partner at KPMG in Milan. “The loan management will be more complex, and it will be crucial to help firms in finding financial innovative solutions to reverse their debt crisis.”