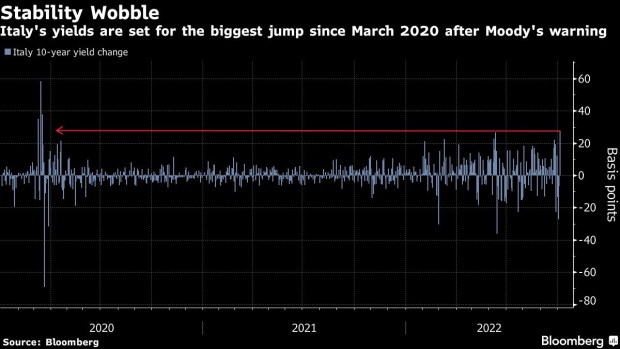 (Bloomberg) -- Investors are offloading Italy’s bonds at the fastest pace since the pandemic first struck following a surprise warning from Moody’s Investors Service about the nation’s finances.

Benchmark 10-year borrowing costs soared as much as 30 basis points to 4.48%, heading for the biggest jump since March 2020. That lifted the premium investors demand to hold the debt over Germany, with Moody’s pointing to policy risk from Italy’s new right-wing coalition.

The measure of bond risk remains below a 30-month peak hit last week in the wake of the election result, with investors looking for signs that a new government will continue a policy of fiscal responsibility set by outgoing Prime Minister Mario Draghi.

“Should the right-wing coalition that won the recent elections attempt to renegotiate some aspects of the country’s National Recovery and Resilience Plan, this will likely delay its implementation, putting downward pressure on investment spending at a time when high inflation and risks to energy supplies are already weighing on economic activity,” wrote Moody’s analysts including Sarah Carlson. “We would likely downgrade Italy’s ratings if we were to anticipate a significant weakening of the country’s medium-term growth.”

Adding fuel to those concerns was a report that Fabio Panetta, a member of the European Central Bank’s executive board, won’t be Italy’s next finance minister, according to a person familiar with the matter.

Giorgia Meloni, who is set to be named prime minister, has been attempting to find a credible figure to run Italy’s finance portfolio. A previous populist coalition in 2018 ended up battling with the European Commission over budgets, sparking a big selloff in the country’s debt.