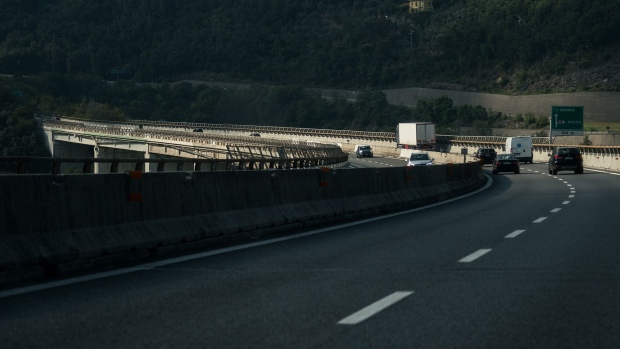 Italy’s fractious government is gearing up for a battle over toll-road licenses, with a junior coalition partner pushing to scrap new rules that make it easier to revoke concessions.

“That norm is a signal of poor credibility when the state gets involved in a license deal with any investor, whether Italian or foreign,” said Marattin, who’s in charge of economic affairs for Italy Alive. “We want that to be removed,” he said on Tuesday.

The new rules, which lapse unless approved by parliament next month, retroactively reduce potential compensation if concessions are revoked, as well as preventing licensees from pulling out unilaterally.

Prime Minister Giuseppe Conte’s coalition will decide in the coming weeks whether to let the Benetton family’s Autostrade per l’Italia SpA keep managing more than half of the country’s highways. Autostrade is a unit of Atlantia SpA.

The acrimonous debate, which started after the deadly 2018 collapse of a bridge in Genoa on a stretch of road managed by Autostrade, has highlighted divisions within the four-way coalition.

The decree makes it easier remove the licenses, a move spearheaded by the anti-establishment Five Star Movement, the coalition’s biggest party. Five Star has campaigned hard to revoke the licenses in a bid to stem a slump in its poll numbers.

The Democratic Party, the other major force in the alliance, has so far favored a negotiated settlement, and it’s up to Conte to reconcile the contrasting demands.

The government may be moving toward a decision to revoke toward the end of the month, Ansa news agency reported Tuesday, with Italy Alive still holding out against the plan.

Asked whether he could rule out his party voting against coalition partners if its demands aren’t met, Marattin, 40, said, “we don’t want to reach that point but we’re convinced of our opinions.”

“If and when Autostrade per l’Italia is judged responsible for the Genoa tragedy, all the resulting measures must be taken, but one second afterward, not before,” Marattin said. “We’re in favor of revocation if and when the judicial authorities establish that there was a serious failure to respect obligations.”

Marattin also called for a review of the entire system of highway concessions to ensure more investment in maintenance and lower tolls. An overhaul is needed, rather than simply replacing Autostrade with another company like state-owned operator Anas SpA, he said.

To contact the editors responsible for this story: Chad Thomas at cthomas16@bloomberg.net, Alessandro Speciale, Jerrold Colten