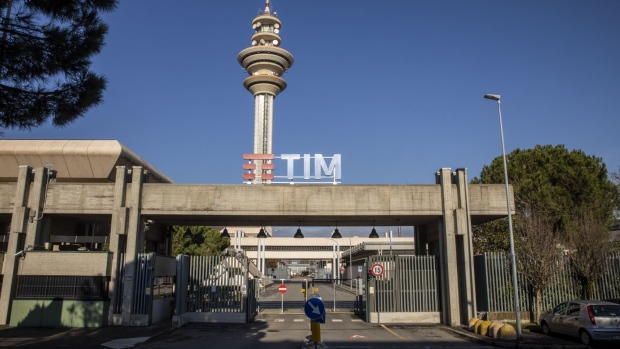 An entrance to the headquarters of Telecom Italia SpA in Rozzano, Italy, on Tuesday, Nov. 23, 2021. KKR & Co. is setting the stage for a battle of control at Telecom Italia with a 10.8 billion-euro ($12.2 billion) bid pitting the U.S. private-equity fund against France’s Vivendi SE. , Bloomberg

If the KKR bid proceeds, Rome will evaluate whether to use Golden Power -- which gives it the right to stop deals or impose conditions on them if assets deemed to be strategic are involved -- the minister said.

Telecom Italia shares fell as much as 3.7% following Giorgetti’s comments, before paring loses to trade down 1.3% at 3:40 p.m. in Milan.

While Italy has in the past blocked corporate moves on assets deemed strategic, Prime Minister Mario Draghi has said he doesn’t oppose deals where the market has the ultimate say.

KKR announced its 10.8 billion-euro ($12.2 billion) bid for Telecom Italia last month and the deal, if successful, would rank as one of the biggest transactions in the telecommunications industry this year. It would also be among the largest purchases ever in the European sector by a private equity firm.

KKR is interested in Telecom Italia’s fixed-line network, which the former monopoly has gradually upgraded from copper to high-speed fiber.