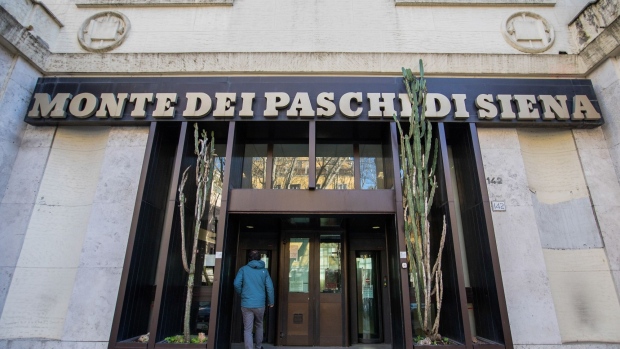 Addressing lawmakers on Wednesday evening, Franco confirmed UniCredit recently entered Paschi’s data room, and the bank now has 40 days to examine its books. That period could be extended, he said, adding he sees no viable options to allow the world’s oldest bank stand alone and in state control. Following a deal, Italy may own a stake in UniCredit, Franco said.

Italy has repeatedly bailed out Paschi, with the first rescue coming in 2009. The government now owns over 64% of the lender, and securing a sale by the end of this year, as agreed with the European Union, has been one of the biggest challenges for Franco since his appointment by Prime Minister Mario Draghi earlier this year.

“Since last autumn, the Treasury started to look for a possible partner for Paschi,” Franco said. “There is no ground to start a dialog with the EU over a plan to keep it stand-alone, but there are no elements to suggest Paschi will be broken up.”

Unicredit which has set onerous conditions for an acquisition, Franco said.

Lawmakers from all the main parties in Draghi’s coalition are questioning the deal’s price tag, with the government on the hook for as much as 10 billion euros ($11.8 billion) based on conditions set by Orcel, according to people familiar with the matter.

Political leaders have also raised concerns on possible job cuts and the potential loss of a prestigious historic brand.

Franco said that redundancies could be much more than the 2,500 outlined in the bank’s plan. A deal with UniCredit could require about 6,000 job cuts, mostly in Tuscany, according to people familiar with the matter

The announcement of new negotiations between Rome and UniCredit has stirred controversy among politicians. Talks had been frozen ever since Andrea Orcel took over the top job at UniCredit, and the news of a resumption of contacts came just hours before Paschi emerged as the worst performer in European regulators’ stress tests.

UniCredit and the Treasury have agreed on the outline of a possible transaction that would grant Italy’s second-biggest bank a capital-neutral deal, with all Paschi’s bad loans and any extraordinary legal cases stripped out, plus protections from other potential credit risks.

Those conditions haven’t been well received in the Tuscan city of Siena, where Paschi is based, and one member of Draghi’s coalition, the Democratic Party, or PD, may be concerned that it could be hurt by the deal.

Tuscany is one of the party’s strongholds, and repercussions from the bank’s loss of influence and job cuts could cut into the PD’s strength.

PD leader Enrico Letta will face questioning from voters on the issue in coming weeks. Letta, a former prime minister, is running to replace Pier Carlo Padoan as a member of parliament for the Siena area. Padoan, a one-time finance minister, gave up his seat to become UniCredit’s chairman.