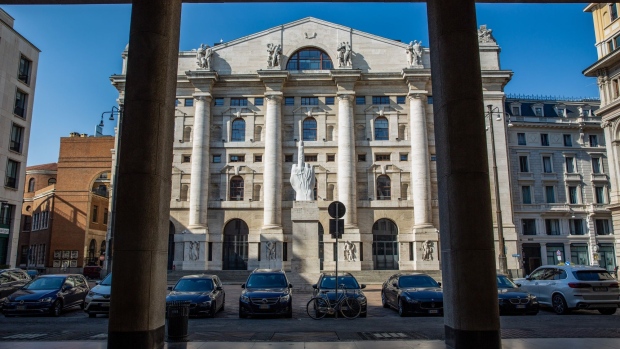 A sculpture entitled 'L.O.V.E.' by Italian artist Maurizio Cattelan, stands in front of Italy's Stock Exchange, the Borsa Italiana which is part of the London Stock Exchange Group Plc, in Milan, Italy, on Wednesday, April 8, 2020. Italy is beginning to look at easing its lockdown after Denmark and Austria became the first two European countries to loosen restrictions as governments seek to gradually revive economies crippled by the containment measures without risking a second wave of infection. , Bloomberg

(Bloomberg) -- Italy is considering teaming up with Euronext NV to pursue an acquisition of the country’s stock exchange operator, people with knowledge of the matter said.

The government and Euronext have been weighing the possibility of a joint purchase of Borsa Italiana SpA, which is owned by London Stock Exchange Group Plc, the people said, asking not to be identified because the information is private. In one scenario under discussion, Euronext would end up as the owner of the Italian bourse while state-owned Cassa Depositi e Prestiti SpA would get a stake in Euronext, the people said.

A number of structures are being considered, and Italy and Euronext could initially pursue separate bids before teaming up later in the process, the people said. If it ends up joining with Euronext, the Italian government may aim for CDP to own a stake in the exchange group on par with the 8% held by France’s state-controlled Caisse des Depots et Consignations, the people said.

A Borsa Italiana deal would mark another major intervention by the Italian government into listed companies in the last few weeks. Earlier this month, Giuseppe Conte’s cabinet halted the sale of a minority stake in Telecom Italia SpA’s network to KKR as it seeks to create a single national grid. In July, Conte forced the billionaire Benetton family to exit Autostrade per l’Italia following a deadly bridge collapse in 2018.

LSE said last month that it has started talks to divest part or all of Borsa Italiana to satisfy European antitrust regulators examining its blockbuster deal for Refinitiv. It has begun a sale process for Borsa Italiana’s bond-trading platform MTS SpA and asked for first-round bids by Aug. 21, the people said.

Deutsche Boerse AG is among parties considering bids for the business, according to the people. MTS could also attract interest from other exchange operators including Nasdaq Inc., the people said. The Italian government may consider pursuing just MTS if it can’t agree on a broader deal for all of Borsa Italiana, the people said.

Morgan Stanley and Goldman Sachs Group Inc. are advising LSE on the sale, according to the people. Some suitors could pursue bids for all of Borsa Italiana, the people said.

Euronext operates stock markets in cities including Amsterdam, Oslo and Paris and is keen to add to its stable under its acquisitive Chief Executive Officer Stephane Boujnah. Earlier this year it missed out on Bolsas y Mercados Espanoles SHMSF SA after the Spanish exchange agreed to be taken over by Switzerland’s SIX Group AG.

(Update with details on government’s plan)