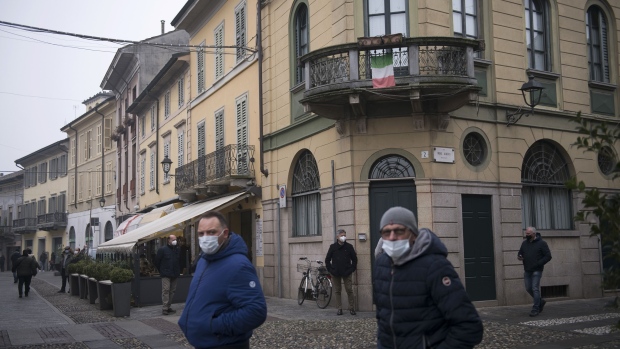 CODOGNO, ITALY - FEBRUARY 21: People wearing protective masks walk through the city center on February 21, 2021 in Codogno, Italy. A memorial for the victims of coronavirus will be inaugurated in Codogno to commemorate the one year anniversary since the discovery of what was thought to be the first patient to test positive for COVID-19 in Italy. (Photo by Stefano S. Guidi/Getty Images) , Photographer: Stefano S. Guidi/Getty Images Europe

(Bloomberg) -- Italian Prime Minister Mario Draghi has extended a ban on movement between the country’s 20 regions for another month -- until late March -- as his new government tries to step up a vaccination campaign to counter the pandemic.

A cabinet meeting chaired by Draghi prolonged travel curbs between regions until March 27 and maintained a 10 p.m. curfew, according to a statement. The government also introduced a ban on visits between households in the highest-risk areas.

Draghi has made speeding up vaccinations a priority for his administration, with a plan to draw on civil protection officials, the armed forces and volunteers. He’s aiming to kick-start an economy crippled by the pandemic as well as a year of national and regional lockdowns.

The premier is weighing whether to make changes to Italy’s three-tiered system of restrictions based on regional conditions. The rules come up for renewal on March 5 as the pandemic has claimed more than 95,000 lives in a country trapped in the worst recession since World War II, with debt at almost 160% of output.

Ministers have also studied demands from regional chiefs including automatic compensation for businesses hit by closures and a review of the criteria for prompting new curbs, in order to allow more businesses to remain open.