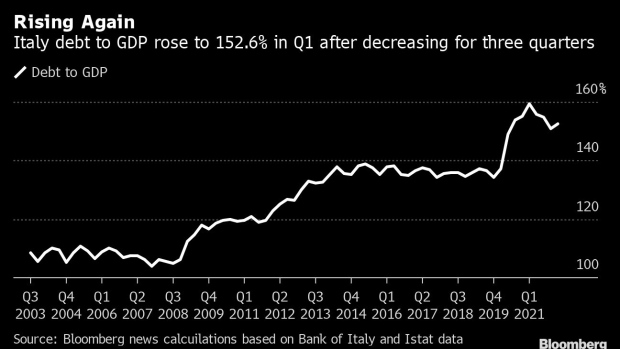 (Bloomberg) -- Italy, one of the world’s most indebted nations, is fighting a battle on a new front: climate change.

As drier-than-usual conditions and an early summer heat wave wreak havoc on agriculture and power supplies, the Italian government was forced on Monday to declare a state of emergency in five regions. That came just after Prime Minister Mario Draghi changed his agenda to fly to the Dolomites mountain range where a record high temperature had sent a glacial ice shelf crashing from the top of the Marmolada, killing at least seven people.

With its finances already strapped by the pandemic and rising energy costs from Russia’s war in Ukraine, Italy -- whose debt accounts for about 150% of its gross domestic product -- is being tested once again. The country has set aside 36.5 million euros ($38 million) in relief funds to drought-stricken northern and central regions.

Bloomberg Economics estimated Tuesday the drought will set back Italy’s economy by 0.2% in the third quarter. “The direct impact on the country’s economy won’t be devastating, but the drought adds to the risks of holding Italian sovereign debt,” economists David Powell and Maeva Cousin wrote in a research note.

High temperatures and exceptionally dry conditions have brought water levels in the Po, the country’s largest river, to its lowest in 70 years. Months without rains and an earlier-than-usual halt in flows from melting snow in the western Alps have made large swaths of the river bed visible -- so much so that a German tank from World War II resurfaced recently.

Hydroelectric power, which usually supplies 15% of the country’s needs, is down 50% so far this year, while salty waters from the Adriatic sea have entered into the Po delta for a record 30.6 kilometers, threatening farming and drinking supplies. Some northern Italian towns are already rationing water. The pressure on home-grown power production comes as Russia is cutting gas supplies to Europe.

“The water crisis we are facing needs national action,” Regional Affairs Minister Mariastella Gelmini said after the government’s decision to declare a state of emergency. She called for the earmarking of almost 3 billion euros of European Union recovery funds to boost water pipelines, build reservoirs and facilitate the distribution to protect harvests as well.

The extreme conditions have led to an estimated 30% decline in seasonal harvest, including forage, barley, grain and rice in the region, according to agricultural group Coldiretti, exacerbating an already precarious situation for the industry, due to the war in Ukraine. Scorching heat above 40 degrees Celsius damaged up to 15% of crops on fruit farms from cherry to pear and apricot. The Po valley accounts for about 30% of Italy’s agricultural production.

Milk production is also affected and there will be repercussions for livestock, which will have to be slaughtered for meat earlier than expected. The drought in the country puts at risk as much as 3 billion euros in agriculture, the lobby said.

“Italy will need to allocate new resources to face this latest emergency,” said Veronica De Romanis, a professor at Luiss University in Rome. She added it is too early to assess the impact of the drought on Italy’s economy.

The country has so far weathered the economic impact from inflation and the war in Ukraine better than many of its European peers, but the outlook is at risk from a looming recession and higher bond yields, which will limit the government’s room for maneuver in coming months.

The impact of climate change for Italy, including floods, droughts, fires and sea surges, will be 2 billion euros a year by 2030 and 5 billion euros by 2050, according to a forecast by the Intergovernmental Panel on Climate Change, cited by the Finance Ministry this year. Four years ago a highway bridge collapsed in Genoa during heavy rains, killing 43 people and exposing the state of Italy’s aging infrastructure.

The tragedy in Marmolada happened a day after a record high temperature of 10 degrees Celsius (50 degrees Fahrenheit) was logged at the glacier’s summit. Draghi cited climate change as the culprit for the ice-shelf collapse.

As Draghi, who has brought relative calm to Italian politics, confronts his latest challenge before crucial general elections next year, he has to keep a keen eye on the Italian budget. The former head of the European Central Bank has been key in securing EU recovery funds for Italy.

But as rates rise to quell inflation, Italy’s debt would be one of the most impacted in a “hot house world scenario,” increasing the default risk, according to a June 2021 research report by FTSE Russell, an index provider owned by London Stock Exchange Group Plc.