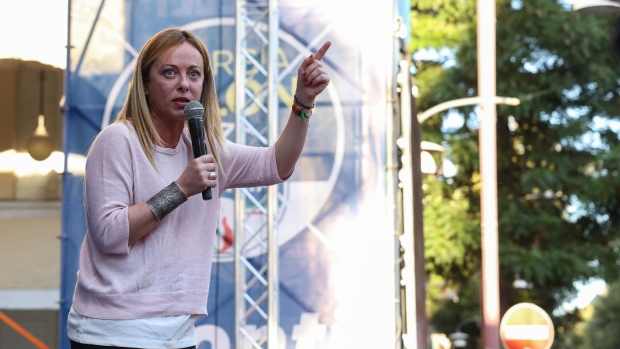 Giorgia Meloni, leader of the Brothers of Italy party, speaks during an election campaign rally in Caserta, Italy, on Sunday, Sept. 18, 2022. Italy’s right-wing coalition, led by Giorgia Meloni's Brothers of Italy, is poised for a landslide win on Sept. 25, according to the last available polls before a blackout period , Bloomberg

(Bloomberg) -- The front-runner to become Italy’s next prime minister chided the European Union for targeting Hungary and dividing the bloc while Russia threatens to escalate its aggression against Ukraine.

“I don’t understand why there’s this fury” Brothers of Italy leader Giorgia Meloni said in a Rai 1 television interview to be broadcast on Thursday. “I don’t think it is smart to for the EU to divide its internal front in the middle of a war.”

Hungarian Prime Minister Viktor Orban has criticized EU sanctions on Russia and explicitly called for their withdrawal on Wednesday, according to Magyar Nemzet. Meloni’s party voted against a European Parliament resolution this month that calls for cutting EU funds to Hungary and says the country no longer qualifies as a full democracy.

“I disagree with Orban on many things, especially on these foreign-policy issues,” Meloni said on Thursday in response to a question on Orban’s sanctions stance. But she also said the EU Commission was pushing Eastern European countries such as Hungary “toward Russia” by insisting on sanctions for democratic backsliding.

Meloni, 45, leads a right-wing bloc that is widely expected to take the most votes in Italy’s parliamentary elections on Sunday. Her balancing act is to assuage her nationalist, euro-skeptic base while reassuring Italy’s EU and NATO partners.

She hit back at current Prime Minister Mario Draghi, who said this week that Italy should focus on dialog with peers such as France and Germany.

“I don’t think this is the right approach,” Meloni said in the interview.

At the same time, she said that Italy should stand firm on supporting Ukraine and isolating Russia, because a “very reliable and very serious stance” would also help Italy receive compensation from allies for the economic pain stemming from spiraling energy costs.

Meloni favors an EU-wide cap on gas prices but said she’s ready to restructure Italy’s energy market once in power without waiting for European peers. Decoupling the price of power from renewable sources from that of gas would cost 3 billion euros ($3 billion) to 4 billion euros until March, she said, and won’t require adding to Italy’s large debt.