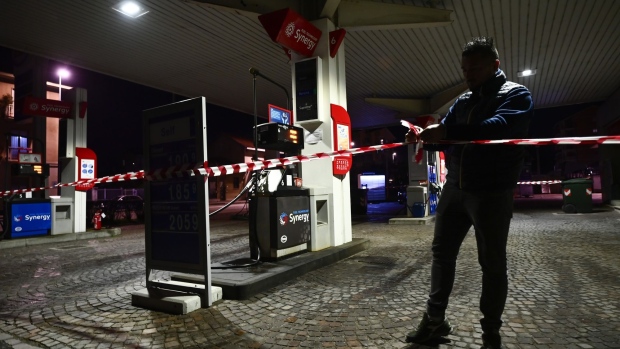 (Bloomberg) -- A two-day strike at gas stations in Italy is a major political headache for Prime Minister Giorgia Meloni, even though disruptions were relatively limited early on Wednesday.

Fuel pumps across the country shut down Tuesday evening as operators protest government measures aimed at reducing alleged price gouging that they say is inexistent. The strike is a setback for Meloni’s three-month old administration, which enjoys strong support among Italians but has seen approval ratings decline in recent weeks.

Meloni has been on the defensive since the end of a car-fuel subsidy in late December sparked protests from consumers and labor unions. She reacted with measures that include a requirement for gas stations to display the average price for gasoline and diesel alongside their own prices. Stations that don’t comply are subject to fines.

Government officials are working to convince unions to call off the strike. While a last-ditch attempt Tuesday by Industry Minister Adolfo Urso failed to avert the protest, it was enough for one of the unions to reduce its duration to 24 hours. The other groups behind the strike confirmed it would last 48 hours.

Further meetings with unions are expected Wednesday. Interior Undersecretary Wanda Ferro told RaiNews24 that she was confident a deal could be reached.

The standoff over fuel prices is already biting into Meloni’s popularity, with 53% of Italians judging her work positively compared to 58% in late December, according to a poll published by Corriere della Sera on Wednesday. Her far-right Brothers of Italy party fell to 30.5% from 31.7% in the same poll.

Most gas stations in central Rome were closed Wednesday morning but traffic was as intense as usual. Most drivers had filled their tanks earlier and a limited number of pumps in cities and on highways are required to stay open to ensure limited service. Some independently-operated gas stations inside large cities also decided to stay open.

Still, some didn’t manage to prepare for the strike. A lonely motorbiker standing in front of a usually busy gas station in central Rome was puzzled by the lack of information. She said her tank was almost empty and was concerned she wouldn’t have enough gas to return home.

--With assistance from Alberto Brambilla.