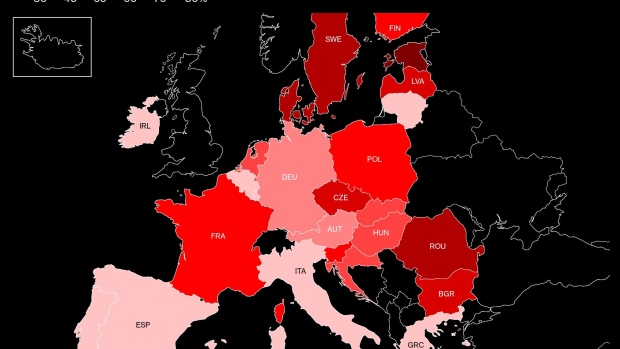 (Bloomberg) -- Italy generates far less of the energy it requires than its European Union peers, producing less than 24% of gross domestic consumption, compared with an EU average of 42.5%.

That puts the country 24th among the 27 EU states in terms of energy self-sufficiency, according to the European Commission’s latest energy balance figures for 2019. Germany’s energy autonomy rate is 35% while France is at 53%.

Italy scores slightly better than the EU average when it comes to renewable energy. The country’s renewable production covers 17.4% of its energy needs, compared with an EU average of 15.5%. On that measure, Italy ranks ahead of France and Germany but behind countries like Latvia and Sweden, 2019 Eurostat data show.

Prime Minister Mario Draghi said at a news conference on Friday in Brussels that the EU will need to shift to renewables “in the long term,” but he added that it will be “difficult for many countries to give up gas immediately.” He also called for joint storage of strategic reserves to protect all EU countries.

Record power and gas prices were one of the main topics EU leaders addressed at a two-day summit last week. The EU has said it wants to lead the global fight against climate change and set an example for other major emitters like the U.S. and China.