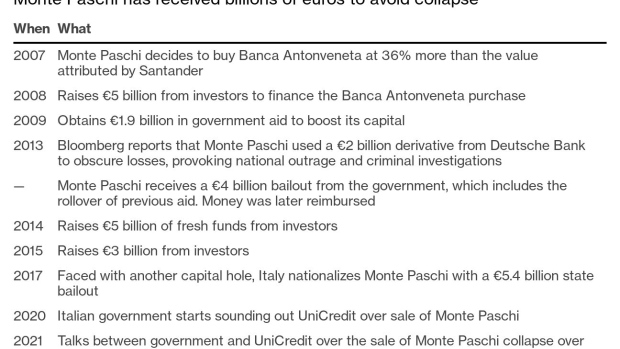 (Bloomberg) -- Talks between Italy and UniCredit SpA over the sale of Banca Monte dei Paschi di Siena SpA fell apart because the bank asked for too much and didn’t adequately value the government’s stake in Paschi, Italy’s finance minister said.

“As we showed in how we managed this negotiation, we’re not willing to sell Monte Paschi at all costs and by any means,” Daniele Franco said during a press conference in Rome. “There was a gap between what they wanted and what we were willing to give in to.”

Talks between UniCredit and the world’s oldest bank collapsed over the weekend, raising concerns that Paschi, which has burned through about 18 billion euros ($21 billion) in investor and taxpayer cash since 2008, will continue to weigh on state coffers.

“The gap was on the size of the capital increase but especially on the value of the business,” Franco said. “We felt that the value that was offered to us was not adequate, and so we suspended talks.”

UniCredit Chief Executive Officer Andrea Orcel argued that about 7 billion euros more was needed to restore Monte Paschi’s capital buffers and permit a deal that wouldn’t hurt his bank’s reserves, but the government was only willing to put in about 3 billion euros, according to people familiar with the matter.

The Italian government has now asked the European Union for an extension to the year-end deadline for finding a buyer and then recapitalize the bank on its own.

“It is probably best for a medium-sized bank like Paschi to merge with other financial institutions,” Franco said. “In the next few weeks and months, we will explore further options and if there are none, or as long as there are none, we will continue to manage Paschi as shareholders, trying to ensure that it becomes ever more solid and efficient.”

A sale was needed because Monte Paschi -- the worst performer in European stress tests -- continues to grapple with a legacy of legal risks and loose lending. With 4.5 million clients, 21,000 employees and 150 billion euros in total assets, the bank is considered too big to fail and a political liability for any government.

The government also extended fiscal benefits for mergers that would sweeten any Paschi sale for another six months to June 2022, but capped the amount that can be claimed to 500 million euros.