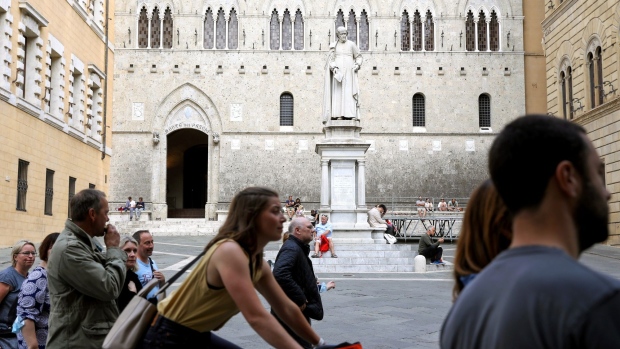 The statue of Sallustio Bandini, an economist and politician, stands in Piazza Salimbeni in front of Banca Monte dei Paschi di Siena SpA bank headquarters in Siena, Italy, on Monday, Sept. 20, 2021. After more than 500 years as a pillar of prosperity in the hills of Tuscany and a decade or so as a byword for dysfunction, Banca Monte dei Paschi di Siena SpA appears to be entering the final chapter of its history. , Bloomberg

Italy may have to weigh potential divestments or other changes to satisfy European Union regulators if it extends a deadline to sell off Banca Monte dei Paschi di Siena S.p.A. beyond this year.

An extension changes the terms Italy agreed to when it won EU support to recapitalize Monte Paschi in 2017 under a set of rules that bend what’s allowed to help banks if there’s a risk of collapse.

Although the EU rarely refuses an extension, it can view more time as more state aid. More state support means there should be further measures to compensate for an advantage rivals don’t get. That can mean selling assets or taking other measures to curb the bank’s power.

Italy has to “decide and propose ways on how to exit the MPS ownership taking into consideration the 2017 state-aid commitments,” the European Commission said on Monday.

In a separate case, Royal Bank of Scotland Group Plc came up with a package to help small firms when it couldn’t sell a unit. Slovenia had to make new commitments when it couldn’t make an initial deadline to divest the country’s largest bank and stepped up efforts to sell its stake.