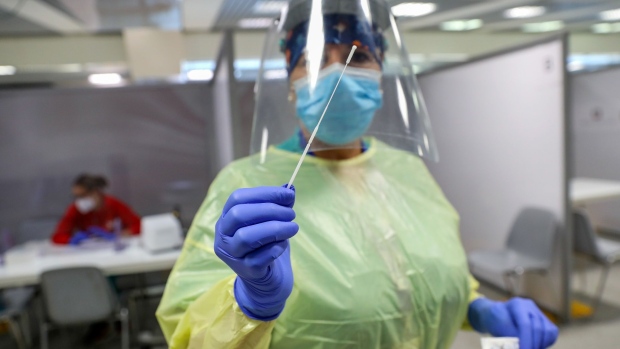 A healthcare worker wearing personal protective equipment (PPE) collects a swab sample from a passenger at the Covid-19 rapid test facility at Fiumicino Airport in Rome, Italy, on Friday, Sept. 25, 2020. A handful of airports are implementing trials of quick-fire coronavirus tests, working with airlines to push technologies still being developed as a way to revive stunted international air travel. Photographer: Alessia Pierdomenico/Bloomberg , Bloomberg

(Bloomberg) -- Italy, the European country that was hit first and hardest by the pandemic and hoped it had dodged the worst of its return, is now also clinging to the idea that incremental measures can be enough.

Every day the coronavirus is setting records in Europe as the continent contemplates the worst recession in living memory. Italian Prime Minister Giuseppe Conte emerged late on Sunday to draw the same conclusion as most of his neighbors: prioritize the economy.

“We must act, deploying all the measures necessary to avert a new generalized lockdown,” Conte said in a televised news conference. “The country cannot afford a new setback which would severely jeopardize the whole economy.”

Trying to keep people Covid-free without limiting their personal freedom is something many nations are having a hard time squaring off in this less deadly wave of infections. When Italy’s new curbs fell short of the demands made by scientific experts, it showed Conte has become the latest leader trapped between competing interests with local and central government clashing.

Italy lags behind countries like France and the U.K. in terms of virus cases but its government too has succumbed to a series of political struggles -- with allies and the opposition, the medical advisers and the economic forecasters -- about what are the best steps to take.

Conte’s new decree -- only five days after a previous package -- picked nightlife and sports as his main targets. It urged mayors to close piazzas and streets at 9 p.m. to stop crowds gathering, and imposed a maximum of six people per table at restaurants which must close at midnight. Amateur and school competitions for contact sports are banned.

Italy’s cabinet also approved a 2021 budget in the early hours of Sunday with a focus on supporting families by extending a moratorium on loan and mortgage payments.

Mirroring the strategy of European partners -- London is stopping households from mixing indoors, Paris is closing at night -- Italy is reluctantly adopting a piecemeal approach. It posted a record 11,705 new infections on Sunday.

What is certain is that there is little coordination between countries in Europe. In Slovakia, every citizen has been promised a test. Switzerland will now require masks in public indoor spaces. The Czech Republic, which has the most cases per capita in Europe, has shut schools.

Like fellow European leaders, Conte is up against political headwinds.

In his case, he’s an unelected prime minister navigating a fractious coalition. Germany’s Angela Merkel will retire next year. In the U.K., Boris Johnson is fighting parts of northern England he only recently convinced to vote for him while juggling Brexit. France’s Emmanuel Macron has his own restive electorate to face next year and in 2022.

In the Naples area, the regional governor has ordered all schools closed until the end of the month all the same.