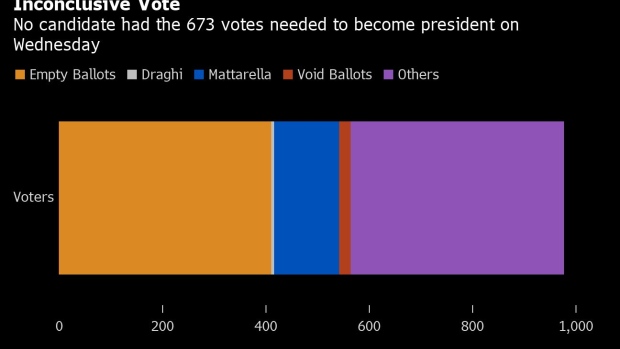 (Bloomberg) -- Italy’s lawmakers failed to overcome an impasse in the secretive process to elect a new president, with a majority of voters leaving their ballot blank for the third day in a row.

Of 978 ballots cast, 412 were empty, with votes dispersed across several candidates, according to the Lower House data.

A breakthrough might come as early as Thursday, when the majority needed will be lowered to 505 of 1,009 eligible voters.

While several analysts still see Prime Minister Mario Draghi as the top contender for the job, his path to the Quirinal -- the palace in Rome where presidents reside -- has become more fraught than initially expected.

Wednesday’s vote recorded a surge in support for outgoing President Sergio Mattarella, who has repeatedly said he is not up for a second mandate, a sign of just how hard choosing his successor has become.

Some parties, including Matteo Salvini’s League, are lobbying for Draghi to remain in his current post.

Center-right parties like his might instead back Senate speaker Elisabetta Casellati, though she is not seen favorably by factions on the other side of political spectrum, like the Democrats and the Five Star Movement which have taken her to task for perceived abuses like using a state plane for personal trips.

Voting is set to resume Thursday at 11 a.m., along with talks between party leaders.