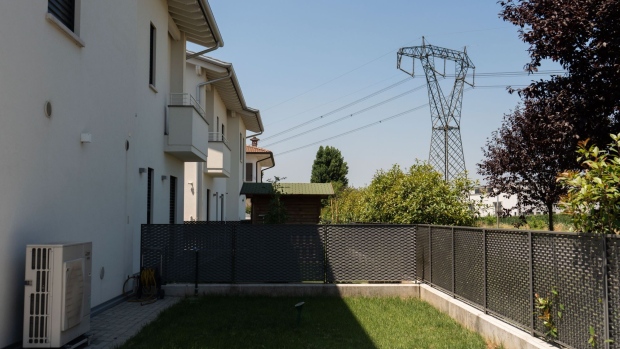 An electricity transmission tower and power lines near a residential area in Brescia, Italy, on Sunday, July 3, 2022. Italy's government plans further measures to cushion the impact of high energy prices, including extending a fuel tax holiday to the beginning of October, Il Messaggero newspaper reported. , Bloomberg

(Bloomberg) -- Italy plans to apply a 50% one-off windfall tax on the extra revenue made by energy companies, according to the text of the proposed budget law obtained by Bloomberg.

The new budget presented by Premier Giorgia Meloni’s right-wing administration is making its way through parliament and must be approved by the end of the year.

Italy has already introduced a 25% tax on company gains, a levy that Eni SpA said was costing the oil giant €1.4 billion ($1.5 billion).

Italy has spent about €75 billion so far to protect its citizens and businesses from the energy crisis and has budgeted another €21 billion in its new budget to continue offering tax breaks, discounts on gas at the pump and other aid.

Meloni’s doubling of the tax is meant to show voters she means business in not giving big companies breaks when citizens are having trouble paying their energy bills.