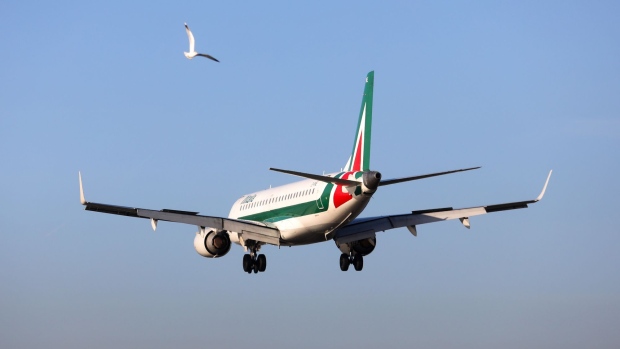 A bird flies past an Embraer passenger aircraft, operated by Alitalia SpA, as it prepares to land at London City Airport in London, U.K., on Thursday, Jan. 5, 2017. Alitalia shareholders approved Etihad Airways PJSC investment of up to $231m, Etihad became Alitalia's largest shareholder in 2014 as part of the Persian Gulf carrier's attempt to gain a European foothold by strengthening struggling carriers in the region. , Bloomberg

(Bloomberg) -- The Italian government is readying 350 million euros ($390 million) in bridge financing for bankrupt airline Alitalia SpA, seeking to keep the carrier flying as it scrambles to find bidders for a last-ditch rescue.

The financing, due to cover six months of operations, was finalized in a cabinet decree document seen by Bloomberg.

The companies leading the bid to bail out Alitalia on Tuesday reaffirmed their willingness to acquire the bankrupt airline but said more work is needed before they can make a binding offer. The bridge financing was earlier reported by Radiocor.

Delta Air Lines Inc. has reaffirmed its intention to invest 100 million euros in Alitalia, though the Italian carrier’s administrators are seeking a stronger commitment from the U.S. company, according to newspaper Corriere della Sera.

State-appointed administrators have been running Alitalia since 2017 after former shareholder Etihad Airways pulled the plug on funding and workers rejected a 2 billion-euro recapitalization plan including 1,600 job cuts from a workforce of 12,500.

Italy’s economic development ministry, which is leading the efforts to rescue Alitalia, had previously set an Oct. 15 deadline for binding offers.

To contact the reporters on this story: Jerrold Colten in Milan at jcolten@bloomberg.net;Chiara Albanese in Rome at calbanese10@bloomberg.net

To contact the editors responsible for this story: Chad Thomas at cthomas16@bloomberg.net, Alessandro Speciale, Karl Maier