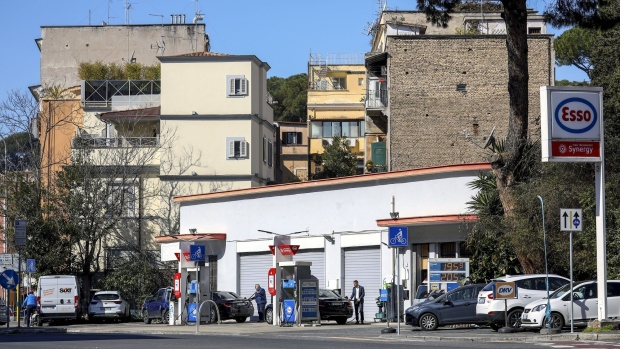 An Esso gas station in Rome, Italy, on Wednesday, March 9, 2022. Gasoline prices are surging across Europe with the war in Ukraine and threats to expand sanctions to energy raising questions about whether Russian supplies will keep flowing to market. , Bloomberg

The package, likely to be approved in the second half of July according to the newspaper, would be worth around 8 billion euros ($8.3 billion). The cost would be covered by Italy’s better-than-expected economic and financial performance this year.

On June 30, Prime Minister Mario Draghi’s government approved measures to support long-term contracts for gas imports, a tax cut on energy bills for households, and a 4-billion-euro loan to energy market operator GSE SpA to speed up the filling of gas storages ahead of next winter.

According to Il Messaggero, the package currently being prepared will:

On Saturday, Italy’s ecological transition minister Roberto Cingolani told SkyTg24 that Russia has reduced gas exports to Italy by 15% from normal levels. While Cingolani expects prices to rise further after a planned closure for maintenance of the Nord Stream pipeline, he said that filling gas storage to 90% by the winter remains a “feasible” target.

Draghi’s government on Monday is expected to appoint a czar to streamline the response to Italy’s current drought, which is crippling agriculture and hydropower production. The prime minister is also expected to meet his predecessor Giuseppe Conte to smooth out recent government tensions.