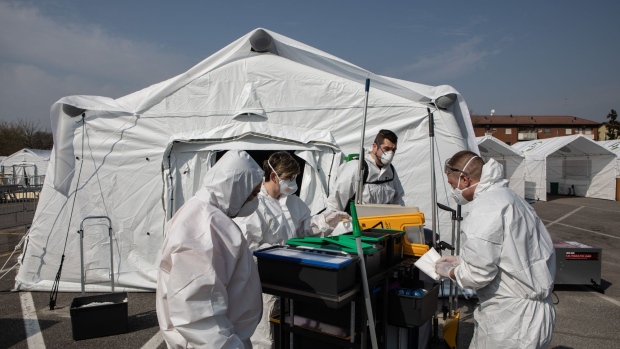 Italy reported a second straight daily decline in the number of deaths from coronavirus, offering hope that stern measures the government has implemented over the last three weeks to combat the outbreak may be bearing fruit.

Fatalities from the disease fell to 756 on Sunday compared with 889 on Saturday, bringing the total to 10,779. New infections in the last 24 hours totaled 5,217, compared with 5,974 the previous day, civil protection authorities said at their daily news conference in Rome. Italy now has 97,689 total cases, fewer than the U.S. and more than China, where the disease’s first outbreak occurred.

Politicians have been quick to seize on recent news as proof that stringent measures imposed over the last several weeks have begun to show results.

The northern region of Lombardy may be nearing the peak of infections, Governor Attilio Fontana said Sunday, while the country as a whole could also be near the top, Vice Minister for Health Pierpaolo Sileri said on Sky TG24 television.

Prime Minister Giuseppe Conte on Saturday took to the airwaves with comments that failed to clarify how much longer Italians will remain under lockdown. He stopped short of an expected extension, while promising cash to poor citizens struggling to buy food as the economy grinds to a halt.

Conte also aimed criticism at the European Union for being slow to respond and failing its hardest-hit members in the hour of their greatest economic need.

“We have an appointment with history and everyone must rise to the occasion,” Conte said at a news conference.

--With assistance from Chiara Remondini.