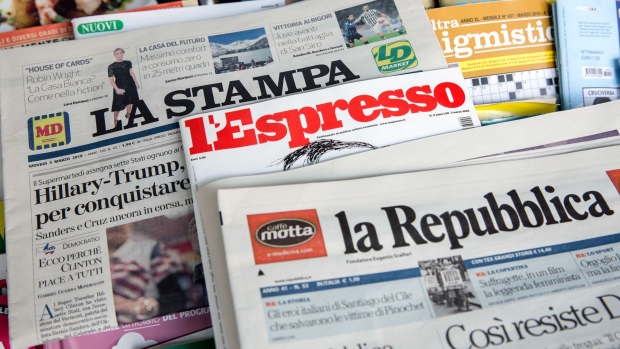 A copy of the La Stampa newspaper published by Fiat Chrysler Automobiles NV's Itedi Spa unit, sits underneath a copy of weekly magazine L'Espresso and daily newspaper la Repubblica, both published by L'Espresso on a news stand in this arranged photograph in Rome, Italy, on Thursday, March, 3, 2016. Fiat Chrysler Automobiles NV and publisher Gruppo Editoriale L'Espresso SpA are combining editorial assets in a bid to create the "leading player" in the Italian publishing industry. , Bloomberg

Italy’s billionaire Agnelli family, the biggest investor in The Economist Group, is expanding further in the media sector by buying the owner of newspapers la Repubblica and La Stampa.

Exor, which will launch a takeover bid on the remaining stock, will pay 0.46 euros per share, a 62% premium over GEDI’s Friday closing price. The stock was suspended Monday.

Under 43-year-old Chief Executive Officer John Elkann, the Agnelli industrial clan, which controls Fiat Chrysler Automobiles NV and Ferrari NV, has been on a deal spree.

Fiat is in discussions for a tie-up with Peugeot SA, with a memorandum of understanding expected to be signed in the coming weeks. Elkann, who is also chairman of Fiat Chrysler and Ferrari, boosted Exor’s stake in The Economist Group to 43% in 2015. The Elkanns already own about 6% of GEDI through Exor.

“In addition to applying our media sector experience, also at an international level, Exor will ensure the stability needed to accelerate the necessary technological and structural transformation” at GEDI, Elkann said in a statement.

The Agnellis have a long history with La Stampa, the main daily in Turin, where Fiat was born in 1899. The family bought the newspaper in the 1920s and merged it with De Benedetti’s Gruppo Editoriale L’Espresso SpA to form GEDI in 2016.

Carlo De Benedetti, the 84-year-old founder of L’Espresso and father of its current owners, in October made an unsolicited offer to buy 30% of GEDI. The sons flatly rejected the offer and one of them, Rodolfo De Benedetti, said at the time he was “shocked” by his father’s move.

“We now hand over to a shareholder of the highest caliber,” Rodolfo De Benedetti said in the statement.