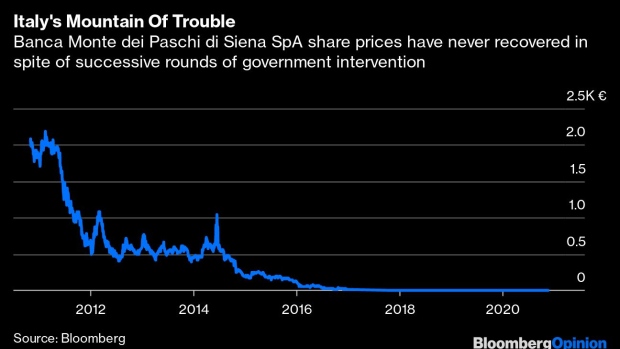 (Bloomberg Opinion) -- The public outcry against bank bailouts during the financial crisis prompted European governments to constrain the use of public money to help lenders in crisis. New trouble at the region’s oldest bank will test whether these rules can outlast the pandemic.

The Italian government faces an impossible decision over Monte dei Paschi di Siena SpA. Italy nationalized the bank in 2017, but had to commit to returning it to the market promptly to abide by European Union state-aid rules. The deadline for a sale —  set for the end of 2021 — is approaching fast, but the bank faces a fresh capital shortfall and a dearth of possible investors. UniCredit SpA, Italy’s second largest bank by assets, is the only plausible buyer but it would demand significant sweeteners. It’s not clear whether these are compatible with EU law.

Rome is a victim of its own mistakes here, as my colleague Elisa Martinuzzi has written. Paschi’s troubles began before the financial crisis with a string of poor supervisory decisions that let the bank make expensive acquisitions at the price of future stability. Successive governments poured public money into Paschi as they tried to stop it destabilizing the country’s banking system.

These bailouts failed to turn the lender around. It is struggling with bad loans, mounting legal risks and poor profitability. The bank recently approved a plan to offload non-performing loans worth 8.1 billion euros ($9.6 billion), but it needs a capital injection of about 2 billion euros. The recent conviction of its former chairman and chief executive officer has increased the danger that the bank will have to cover at least some of the legal claims, estimated at about 10 billion euros.

To make things worse, Italy’s coalition government of the left-wing Democratic Party and the populist Five Star Movement is split over Paschi’s future. Roberto Gualtieri, the Democrat finance minister, is in favor of a market deal, which could prevent a fight with Brussels. Five Star wants to turn the lender into a national development bank.

The populist party, and a few Democrats, believe the bank would benefit from extended state ownership. They claim the pandemic has hammered valuations and that the government would need to accept significant losses by selling now. They also fear job cuts in the event of privatization, and believe the lender could contribute to Italy’s recovery by supporting state investment.

These arguments show no understanding of Paschi’s recent history. The bank had strong ties with Italy’s political parties, especially from the left. Those connections were part of the problem, as shown by all the state money that’s been wasted on trying to prop up the lender. Prolonged nationalization would merely repeat the mistakes of the past.

The government has to accept that it needs to sell Paschi, but a privatization will be difficult. The size of the bank — and its problems — means a large Italian acquirer such as UniCredit is the most viable option. However, UniCredit will know it’s the stronger party in this negotiation. There’s also an unhappy precedent for Italy: In 2017, it liquidated two regional lenders from Veneto, in northeastern Italy, while selling their assets to Intesa Sanpaolo SpA. The government had to pay Intesa 3.5 billion euros to let it preserve its capital position, while also providing it with extensive guarantees on future losses and legal risks. UniCredit will no doubt demand similar.

Brussels will need to monitor the details of any deal. The pandemic prompted the European Commission to suspend its state-aid rules, but this isn’t meant to apply to preexisting troubles. The deal between Intesa and Rome over the Veneto banks made a mockery of the single European rulebook for failing lenders, and dealt a blow to Europe’s so-called “banking union.”

Covid-19 requires flexibility on the part of regulators. But it cannot be a free pass. The failure to face reality has always postponed a lasting Paschi solution. There’s no point in endlessly repeating the same mistakes.