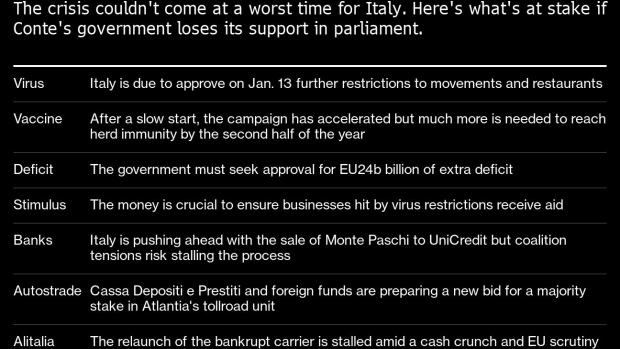 Matteo Renzi, leader of the Italy Alive party, wears a protective mask while speaking at a news conference in Rome, Italy, on Wednesday, Jan. 13. 2021. Renzi's party is tiny, but without his lawmakers Conte doesn’t have a parliamentary majority. , Bloomberg

(Bloomberg) -- Italian Prime Minister Giuseppe Conte is struggling to hold onto power after a junior partner in his coalition pulled out, robbing him of his majority in parliament.

Former Premier Matteo Renzi said Wednesday night that ministers from his Italy Alive party would quit the cabinet, attacking Conte for failing to do enough to tackle the country’s problems. Though the party is tiny, Conte relied on it to maintain his majority. Conte may seek a confidence vote in parliament next week, newspapers including la Repubblica reported.

Renzi’s decision sparks a government crisis which could last days or even weeks, and has no clear solution in sight. Before making any other moves, Conte will have to formally accept the resignations of Renzi’s two ministers.

Still, Conte has several paths to remain in power, or to return later as premier:

Italy’s ten-year yield rose 1 basis point to 0.61%, with the spread to German debt widening to 113 basis points. Any slip in Italian bonds is an opportunity to enter the market as snap elections are unlikely given the “incentive” to manage European Union recovery money and the tight timeline to organize a vote, Citigroup strategists led by Aman Bansal said.

Pulling out at a such a crucial moment for the country amounts to “an act of courage,” Renzi said at a news conference in Rome. Conte’s government has not done enough to resolve problems from education to infrastructure, as well as the virus, the ex-premier said.

The timing of the crisis for Conte could hardly be worse, with Italy battling a worsening pandemic and a recession. At a cabinet meeting due Thursday Conte is set to sign off on a plan to widen the country’s deficit by about 24 billion euros ($29 billion), while overnight his government extended its emergency powers to battle the pandemic through April 30.

Renzi had been dialing up the pressure on Conte since late last year, slamming the prime minister’s plans for managing and spending EU rescue funds. Renzi says the plan has been improved following his demands, but he’s been insisting on further conditions, including that Italy tap a European Stability Mechanism credit line for health spending.

“The real issue is, should we spend more money on health with the ESM?” Renzi said following his announcement on Wednesday.

(Updates with bonds in sixth paragraph.)