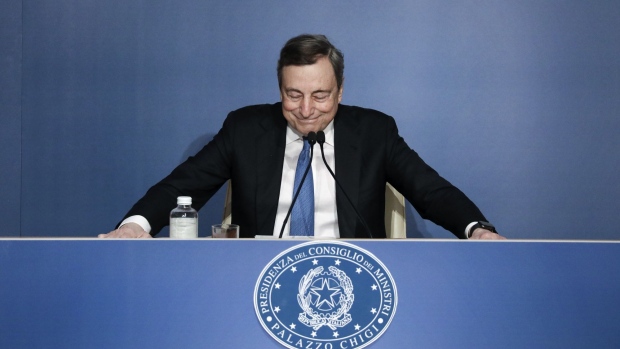 Mario Draghi, Italy's prime minister, during his end of year address in Rome, Italy, on Wednesday, Dec. 22, 2021. Draghi said Italy’s stability won’t be in jeopardy in the future -- even under a different leader -- as long as the government is supported by the same broad majority it has now. , Bloomberg

(Bloomberg) -- Mario Draghi should continue in his hands-on role as Italy’s prime minister, even as lawmakers begin selecting a candidate for the more ceremonial position of president, League party leader Matteo Salvini said.

Draghi, former chief of the European Central Bank, is a top contender to be Italy’s president and has signaled he would be open to making the move to the Quirinale, the former papal palace where Italian presidents reside.

But parties in parliament are trying to find consensus on an alternative candidate and keep Draghi as the head of the government who will have to pass the reforms required to keep European aid funds flowing. Voting for the new president starts on Monday.

The League’s center-right bloc is searching for a new candidate of its own after media mogul and former prime minister Silvio Berlusconi withdrew from the race. The Democratic Party, which vies with the League in polls as the largest party, on Sunday started putting forward the name of Andrea Riccardi, a former minister and the founder of the Catholic Sant’Egidio movement.