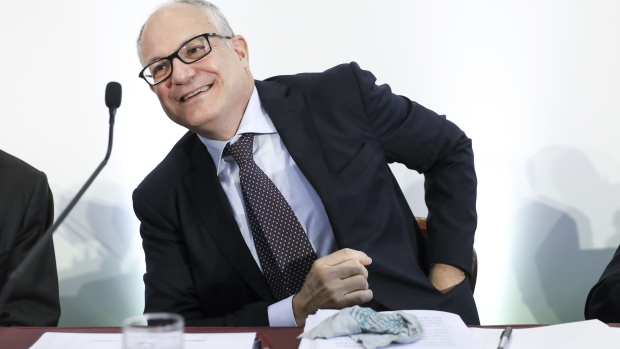 Roberto Gualtieri at a World Savings Day event in Rome, on Oct. 31. , Bloomberg

(Bloomberg) -- Roberto Gualtieri, a former Italian finance minister supported by the center-left Democratic Party, was poised to become Rome’s new mayor after beating a right-wing rival in a contest often seen as a key bellwether for national politics.

Gualtieri was on course to win a run-off vote against Enrico Michetti on Monday afternoon with about 60% of ballots counted. Michetti, a lawyer with no previous political experience, was backed by Giorgia Meloni’s Brothers of Italy, as well Matteo Salvini’s League and Silvio Berlusconi’s Forza Italia.

“We should all take part in a new season for Rome,” Gualtieri said. “I am calling on all political forces to create a pact for Rome’s development and employment.”

The result cements the center-left’s status as the biggest winner of this month’s local election, which has shifted the balance within the broad coalition that backs Prime Minister Mario Draghi.

Gualtieri served as minister of economy and finance from 2019 until early this year, and takes over from outgoing mayor Virginia Raggi of the Five Star Movement. The anti-establishment party, along with the League, faired poorly in the ballot. Both are part of Draghi’s coalition.

Rome is notoriously hard to manage, and Gualtieri has his work cut out for him. In recent years the capital has suffered from a string of problems including poor waste management, an ailing public transportation system and even an invasion of wild boars. Raggi came to power five years ago promising change but ultimately wasn’t able to deliver.

Run-offs took place in about 65 cities where no candidate reached a 50% majority earlier this month. In Turin, the center-left was leading while the vote in Trieste was too close to call.

Just before the vote in Rome, a controversial article Michetti once penned about the Holocaust resurfaced, and he was accused of anti-Semitism.

(Updates with Gualtieri victory and quote in third paragraph.)