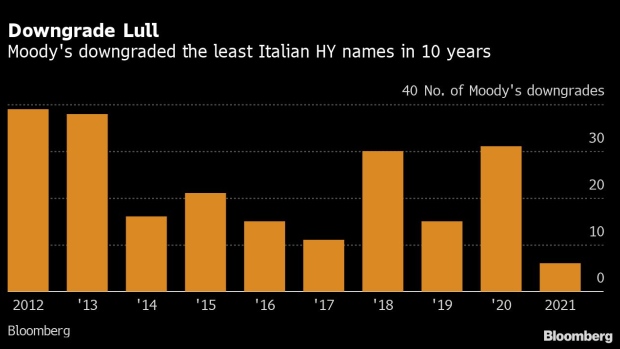 (Bloomberg) -- Italy’s fractious politics have a long history of causing headaches for investors. This time, the mood is all calm.

Italian bonds led an advance among euro-area peers on Monday, with 10-year yields sliding for a third day. While stocks fell today, Italian benchmarks have outperformed global indexes this year.

In the run-up to the election, junk-rated companies have been able to tap debt markets with relative ease. Out of the 28 new issues that hit the market in 2021, 64% are trading at tighter terms, according to Bloomberg’s BVAL pricing data.

Mario Draghi’s leadership as prime minister has ushered in a rare period of political stability and economic growth in Italy. The procedure to choose the country’s president, a largely ceremonial role, is drawing attention this time due to the fact the 74-year old former head of the European Central Bank is a top contender for the post.

Markets, buoyed by Italy’s recent relatively stable politics and strong economy, have largely shrugged off concerns about a change in leadership.

“Our base case is for Draghi to become the president without triggering a snap election,” wrote Aman Bansal, rates strategist at Citigroup Inc., adding “This is close to what is priced in the market and should evoke limited market reaction.”

The backdrop to such tranquility is the robust outlook for Italy’s economy, with GDP set to expand 4.3% this year and 2.1% next, according to a Bloomberg News survey.

That deal was more than 2.2 times oversubscribed. Autostrade per l’Italia also placed a total 1 billion euros of bonds on Jan. 18 at tighter spreads than guided.

“We would be comfortable adding risk to individual stories we like,” said Olivier Monnoyeur, a portfolio manager at BNP Asset Management. “That wouldn’t be the case if it were happening in a weak economy, but clearly that’s not the case.”

To be sure there’s also an argument that Draghi’s departure could potentially trigger renewed political instability and even early elections. Matteo Salvini, leader of the League party, told reporters on Sunday night that moving Draghi now would be “dangerous for Italy.”

The premium investors demand to hold Italian debt over German counterparts -- a key gauge of risk in the region -- is set for its narrowest monthly range in more than a decade, banishing memories of the 2018 general election which installed a populist coalition, ushering in a period of political and financial chaos in the region.

If there were to be any fallout from the presidential election, it might manifest itself in the subordinated notes of banks and bonds of utilities, said Piero del Monte, a high yield portfolio manager at Franklin Templeton.

That’s because both sectors are seen as being close to the government. In August 2019, for example, the debt of phone company Telecom Italia SpA and lender Banca Monte dei Paschi di Siena SpA fell when the then-Deputy Prime Minister Salvini ended his coalition with the Five Star Movement and attempted to push for new elections.

Markets would frown at the prospect of fresh general elections now and will be on the lookout for other potential setbacks such as any delays to deploying pandemic bailout funds, said Franklin Templeton’s Del Monte.

“However even the most pessimistic scenarios seem manageable to us,” he said.