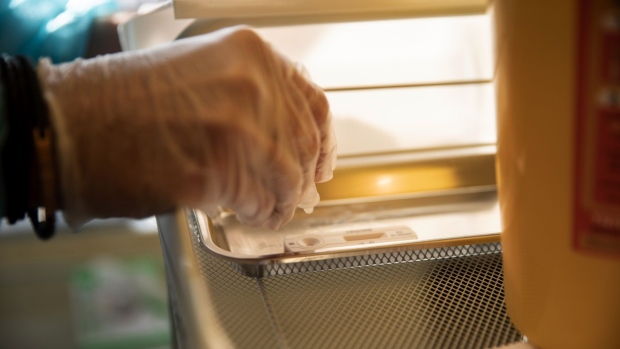 A health worker performs an anti-body test in a Covid-19 rapid test center tent in Paris, France, on Thursday, Nov. 5, 2020. With virus cases and deaths rising at a faster rate in France, Italy, and Spain than in the U.S., governments are electing to take measures they hope will quickly curb contagion while inflicting less damage on the economy than the first wave of closures did in the spring. Photographer: Adrienne Surprenant/Bloomberg , Bloomberg

(Bloomberg) -- The first Italian to test positive for the omicron variant had a negative test before his flight and moved around Italy for days before his diagnosis, showing the challenge authorities face in containing the spread of the new strain.

The man, who hasn’t been publicly identified, had a negative PCR test before boarding a flight that originated in Maputo, Mozambique, he said in a statement on Sunday.

He arrived in Rome on Nov. 12 and traveled to his home in a town north of Naples, Sky News Italia reported, without saying where it got the information.

Days later, the man, an employee of the oil company Eni SpA, flew to Milan for a previously scheduled medical exam. There, he rented a car, stayed overnight at a hotel, and ate in a restaurant, before driving the next morning to a hospital for the procedure, according to Sky. Eni confirmed in a statement that the man was an employee who’d tested negative before leaving Mozambique.

“During the entire trip I respected social distancing and barrier norms known to all,” the man said in his statement.

“I went to San Donato Milanese for the prescribed company health checks, and at the same time also took a new Covid PCR test needed for my flight back to Maputo,” he said. “Having been told the test was positive, I traveled to my home in Caserta, avoiding all contact with third parties, to begin the prescribed quarantine.”

The other five members of his family -- the man’s wife, two children, mother and mother-in-law, have also tested positive for Covid. Investigators are seeking to confirm whether they, too, have the omicron variant.

“Considering my family, which includes men and women aged from 8 to 81, and the mild symptoms we experienced in these 10 days, I can say that I am happy to have been vaccinated since the vaccine worked very well,” he said.

The case indicates that omicron has been in Europe for at least two weeks and highlights the weakness of testing regimes designed to identify Covid cases before travelers board flights.

In the Netherlands, which requires pre-flight testing to enter the country, 61 people on two flights from South Africa on Friday tested positive after landing, with 13 of those having the omicron variant and the other cases still under review, health authorities said Sunday.

Omicron, which may be more contagious and resistant to vaccines than previous strains, has arrived in Europe at time when cases of the delta variant are raging. Countries including Austria, the Netherlands and Germany had already moved to tighten Covid restrictions.

Governments across the world implemented travel bans on southern African countries in the past few days in hopes of buying time to contain the spread that’s already been identified in a handful of European countries.