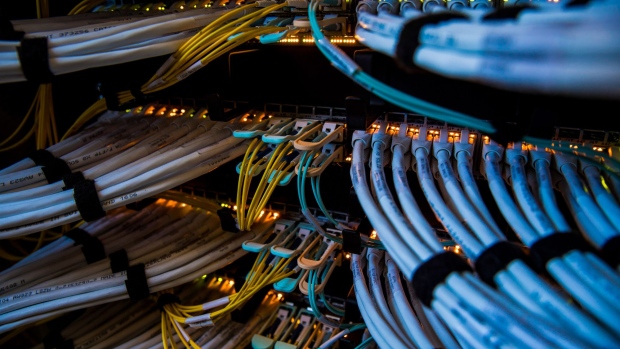 Fiber optic cables, center, and copper Ethernet cables feed into switches inside a communications room at an office in London, U.K., on Monday, May 21, 2018. The Department of Culture, Media and Sport will work with the Home Office to publish a white paper later this year setting out legislation, according to a statement, which will also seek to force tech giants to reveal how they target abusive and illegal online material posted by users. , Bloomberg

(Bloomberg) -- Investment firm Grain Capital is in talks to buy Irideos SpA, a network and service provider in Italy, in a deal that could approach half a billion dollars, according to people familiar with the matter.

The U.S. fund, run by media and communications investor David Grain, made a nonbinding offer for Irideos earlier this month, valuing the company at as much as 400 million euros ($464 million), said the people, who asked not to be identified because the discussions are private.

Deliberations are ongoing and no final decisions have been made, according to the people. Representatives for Irideos declined to comment, while a representative for Grain Capital didn’t return emailed request for a comment.

Irideos, based in Milan, offers cloud and digital services, operating 15 data centers in Italy and about 30,000 kilometers (19,000 miles) of fiber-optic networks, according to the company’s website. The Italian infrastructure fund F2i SGR SpA owns 78% of Irideos, with the remaining stake held by the Marguerite Fund, a state-backed European investor.

Italy is a fragmented market for telecommunication services. The former phone monopoly Telecom Italia SpA has held merger talks with smaller, state-backed rival Open Fiber Spa, but has failed so far to agree on a deal. Vodafone Group Plc and CK Hutchison Holdings Ltd.’s Wind 3 also compete in the country.