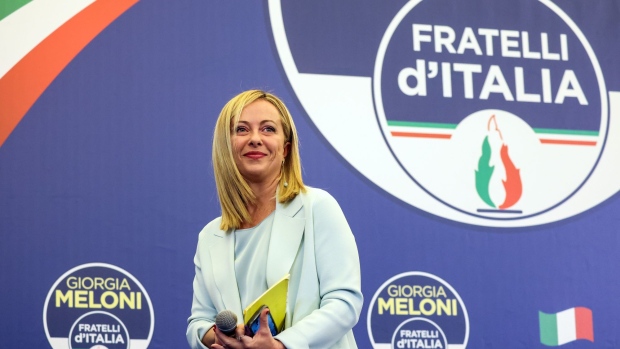 (Bloomberg) -- The composition of Italy’s incoming right-wing government, likely under Giorgia Meloni, is still far from certain with just a week to go before the opening of the new parliament.

The far-right leader is keen to form a credible cabinet to reassure investors and allies concerned about the country’s debt, an energy crunch and the potential failure to secure €200 billion of European Union funds. Moody’s Investors Services on Wednesday warned that delaying reforms needed to keep European money flowing and modernizing Italy’s economy may lead to a rating downgrade.

Yet, the refusal by Fabio Panetta to accept the key finance ministry post has thrown Meloni’s plans somewhat into disarray. She had been counting on the European Central Bank board member to take the job, according to people familiar with the matter who asked not to be named discussing confidential conversations.

Meloni will come under pressure to find an alternative quickly, if she wants to speed up the transition from the outgoing administration led by Mario Draghi. The first session of the new parliament, where Meloni’s coalition has a comfortable majority, is scheduled for Oct. 13. There was hope that the new government would be in place as early as Oct. 20, in time for a meeting of EU leaders.

That timeline was always going to be too ambitious and, according to Italian media, Meloni has said she won’t be attending as premier.

Amid mounting inflation and recession risks, Meloni will still seek to appoint a respected technocrat -- rather than a politician -- as finance chief. With Panetta out of the picture, the option of confirming the incumbent, Bank of Italy veteran Daniele Franco, is gaining traction.

Another option is Domenico Siniscalco, who held the post in 2004-05 under Prime Minister Silvio Berlusconi. Outsiders include Luigi Buttiglione, a former Bank of Italy official who has spent the past two decades in finance, and Dario Scannapieco, the head of state-backed lender Cassa Depositi e Prestiti SpA.

Besides the finance ministry, another key post is that of energy. Roberto Cingolani, a scientist currently serving as ecological transition minister, is held in high regard by Meloni but probably won’t be willing to stay on, Corriere della Sera reported on Thursday.

The role is crucial to ensuring Italy remains on course to wean itself off Russian gas this winter without being forced to impose blackouts. Among the names touted in Italian media for the post is the chief executive officer of Eni SpA, Claudio Descalzi, but that would mean depriving the oil giant of its leader just as it works with the government to secure gas supplies from Algeria to Egypt.

The clock is ticking. The new government will have to immediately start working on a budget law must be approved by Dec 31. By that date it will also have to complete at least 26 of the 55 targets required to ensure the disbursement of the next tranche of EU funds in early 2023.

To be sure, Meloni will have some leeway when it comes to spending, especially if she wants to deliver on promises to shield families and business from higher energy costs. Draghi is leaving the next government with a spending cushion of about €9 billion, thanks to better-than-expected growth.