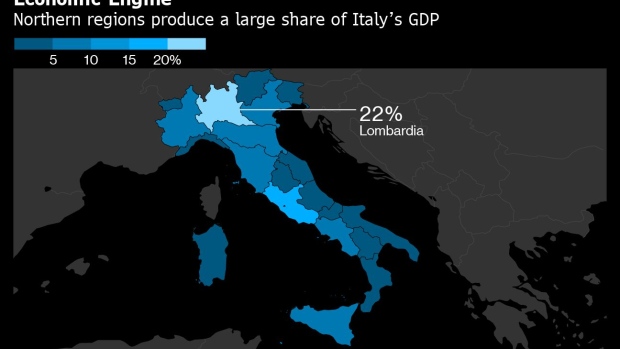 The next phase in Italy’s relaxation of emergency measures to combat the coronavirus may proceed at different speeds in various zones, with some northern areas temporarily excluded from a reopening of borders between regions, la Repubblica reported.

It may prove “difficult” for northern territories -- particularly the hard-hit Lombardy region around Milan -- to be allowed to open their borders on June 3 as planned, the newspaper reported, citing government views on the most recent figures from public health authorities.

A decree from Prime Minister Giuseppe Conte that allowed a wide range of businesses to reopen on May 18 stated that Italians will be allowed full freedom of movement within the country on June 3, though health experts warned from the outset that differences in regional infection levels could make that problematic. Some governors have lobbied Rome to avoid different opening dates by region.

The economic situation is particularly dire in the north, the epicenter of the Italian outbreak. About half of all small businesses in Lombardy are at risk of collapsing, business lobby Confcommercio has said.

Lombardy and some neighboring northern areas could be made to wait until June 10 to open borders with other regions, Repubblica said.