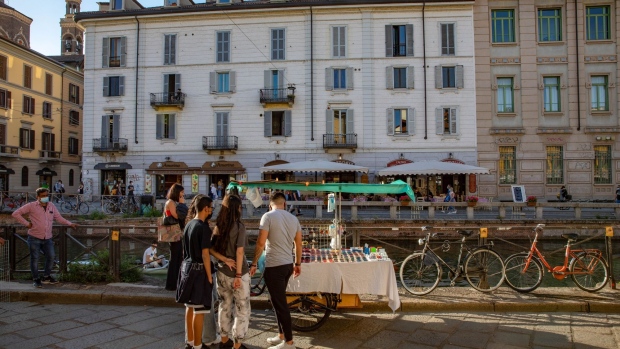 Pedestrians stop by a street vendor's stall in the Navigli neighborhood in Milan, Italy, on Thursday, May 27, 2021. Italy has approved a 40-billion-euro ($49 billion) stimulus package that extends economic support for businesses and families hurt by Covid-19 restrictions. Photographer: Francesca Volpi/Bloomberg , Bloomberg

S&P affirmed the BBB rating on Italy, which is two notches above junk. The country’s prospects are looking brighter as increasing rates of vaccination have allowed it to avoid renewed lockdowns. Recovery aid from the European Union is supporting the economic an economic rebound and ECB action in financial markets is keeping bond yields in check.

“The clear strengthening of commitment to pro-growth reforms, and the positive consequences that higher growth will have on public finances, S&P said in a statement Friday. “Steps by the European Central Bank (ECB) since the pandemic’s start to ensure a unified monetary policy within the euro area have also supported Italy’s investment-led recovery.”

Italy is the biggest beneficiary of European Union recovery fund cash with nearly 200 billion euros ($233 billion) coming its way in grants and loans. Prime Minister Mario Draghi’s administration is focusing its energies on infrastructure investments, energy transition and projects that can help it grow out of its mammoth debt which ballooned during the pandemic.

Gross domestic product is seen increasing 6% this year bouncing back from an almost 9% decline in 2020, according to government estimates. Debt is expected to progressively decrease in the next few years from 153.5% of output this year.