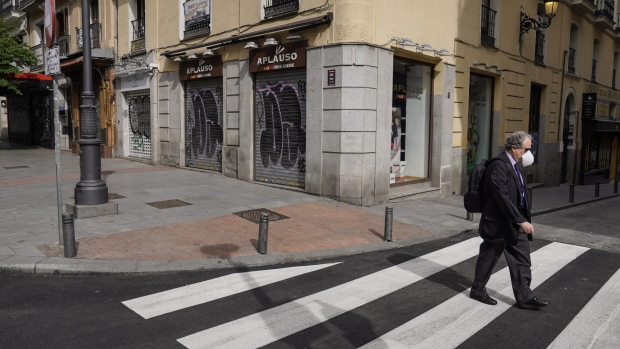 A commuter wearing a protective face mask uses a pedestrian crossing as shuttered stores line the street beyond in Madrid, Spain, on Thursday, May 7, 2020. , Bloomberg

The coronavirus outbreak in Italy has struck overwhelmingly among the nation’s older population and those with preexisting medical conditions, according to the national health authority.

The ISS, which publishes a range of studies on the outbreak including a detailed weekly report, confirms a trend seen since the beginning of the emergency, with the average age of Italians who’ve died from the virus at around 80.

With over 32,000 deaths and more than 230,000 cases, Italy was the original European epicenter of the pandemic.

The country began emerging from a nationwide lockdown on May 4, when about 4 million people went back to work. 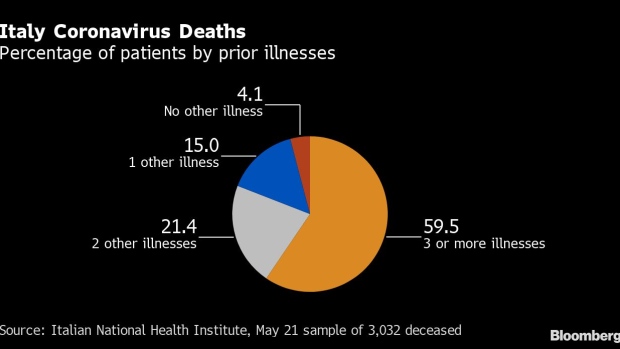 Most shops, bars and restaurants were allowed to reopen two weeks later with distancing rules, and Italians are again allowed to travel freely -- but only within their home regions.

The government has pledged to allow full free movement from June 3. But with some areas still seeing hundreds of new cases a day, Premier Giuseppe Conte may keep borders closed in the northern regions of Lombardy and Piedmont, newspapers including Corriere della Sera reported Tuesday.

Government officials and health experts also fear that young people may have gotten the message that they’re not at risk from the pathogen.

After throngs of them gathered in squares and nightlife districts over the weekend, many not respecting rules on social distancing or use of masks, local officials have begun weighing moves to limit large groups.

Although the average age of virus cases is 62 years old, about 30 per cent of those infected are under 50. Still, fatalities point to a wider generation gap.

ISS analysis shows that as of May 25 only 1.3 per cent of virus fatalities have been under 50 years of age and more than 57 per cent were over 80.

Nearly half of new cases in May were registered at nursing homes.

The most recent ISS weekly study, based on a sample of about 10 per cent of fatalities until May 21, also showed that just 124 victims, or 4.1 per cent of the total, had no previous pathology.

Almost 60 per cent of victims suffered from at least three prior illnesses and about a fifth had two conditions.

More than 68 per cent had high blood pressure, about 30 per cent had diabetes and 28 per cent suffered from heart disease, according to the report.

Official figures may not capture the full picture: many patients that died in their homes may not have been tested.

Several studies have shown a surge in fatalities in the country, especially in the north, at a rate higher than what official COVID-19 figures indicate.

Italy had 11,600 more “unexplained” deaths in the first quarter compared with previous years, none of which were registered as COVID-19 fatalities, according to a joint report by ISS and national statistics office Istat.