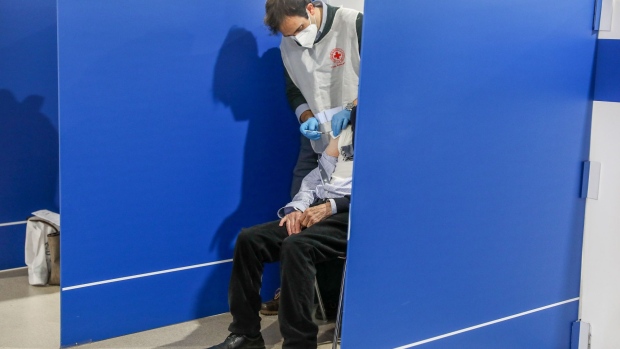 A health worker administers the Covid-19 vaccine at a Covid-19 vaccination center outside Rome's Termini railway station in Rome, Italy, on Friday, Dec. 3, 2021. Italy is facing a resurgence of cases, which prompted the government to issue new rules that will all but shut out unvaccinated people from leisure activities. , Bloomberg

(Bloomberg) -- Italy could set aside extra funds to help people who suffer side effects from Covid-19 jabs, after Matteo Salvini’s League party pushed for the expansion of the country’s vaccination compensation program.

The government created a program to compensate citizens harmed by mandatory vaccines in 1992, and talks are underway to extend it to cover Covid vaccinations after they became a requirement for everyone over the age of 50 earlier this month.

The League’s proposal to increase the amount of funding by 50 million euros for 2021, and to offer compensation to people who were advised but not required to get vaccinated, is facing parliamentary debate, according to a document seen by Bloomberg.

As Prime Minister Mario Draghi implemented an increasingly aggressive vaccination push, Salvini has sought to appeal to Italians on both sides of the debate.

The League leader has called for greater public support of the inoculation drive while demanding the state take full responsibility for any injury caused. He also unsuccessfully lobbied the government to subsidize free tests for workers who refused to get jabbed.

Health ministry data show that about 90% of Italians over the age of 12 have been vaccinated against Covid-19. All shots administered were approved by health authorities, and side effects rare.

A 2021 report by Italian pharmaceutical agency Aifa found 17 severe reactions for each 100,000 Covid vaccines in the country.

In the European Union and European Economic Area, where over 627 million doses have been given, there were just over 835,000 reports of suspected side effects, according to the European Medicines Agency, or 0.13% of the total.