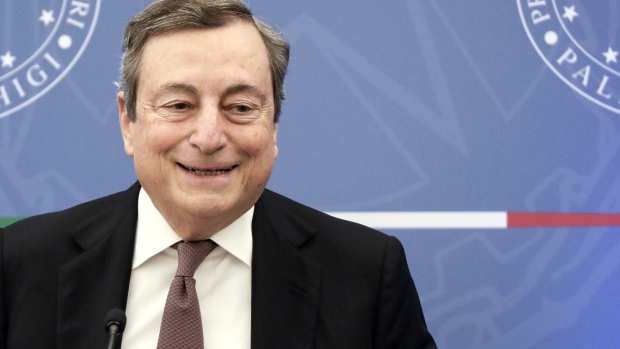 Mario Draghi, Italy's prime minister, during a news conference on a vaccine mandate in Rome, Italy, on Monday, Jan. 10, 2022. Italy made vaccination compulsory for people over 50 and further reduced what the unvaccinated can do in its latest bid to fight the surge in Covid-19 cases. , Bloomberg

(Bloomberg) -- Italy begins its papal-style vote to choose a new president Monday with Prime Minister Mario Draghi touted as a top contender for the job.

The former European Central Bank president was tapped by current President Sergio Mattarella to lead a so-called technocratic government in February 2021 at the height of the pandemic and as a non-politician would likely enjoy cross-party support in assuming the new role. Draghi’s reform agenda has been running out of steam, and he has signaled that he’d be open to making the switch to president.

What does the Italian president do?

Italian presidents have limited power, and their role is mostly ceremonial. Yet, no one gets to be premier without their approval — presidents nominate heads of government and their chosen ministers. They can also veto appointments, which Matrella did in 2018 when he opposed Paolo Savona becoming finance minister. Presidents can dissolve parliament, or decide not to, which means they tend to act as a force of stability in crises. They can convince parties to accept the appointment of a non-political prime minister like Draghi, without going to election. And they can reject laws and decrees they deem unconstitutional. Italy has had 12 heads of state so far, including Mattarella, none of them a woman.

How does the vote work?

The complicated process is sometimes compared to the papal conclave that elects the head of the Roman Catholic Church. Both processes are shrouded in secrecy. Presidents are elected by lawmakers of both houses and regional representatives at the Palazzo Montecitorio in Rome, seat of the Chamber of Deputies, with voters writing their candidate’s name on a piece of paper in a booth under the speaker’s stage and the Lower House head reading out the ballots when they’re done. And both elections can last several days — the longest for a president took place in 1972 when Giovanni Leone reached a 51% majority after 23 votes. The presidential election requires a two-thirds majority in the first three rounds, followed by an absolute majority if consensus is hard to reach.

How likely is Draghi to get the job?

Though each party decides which candidate to support, the secrecy of the process leads at times to defections, so an outcome is hard to predict. Given the existing cross-party for support for his government, Draghi could potentially secure a majority with some of his current backers likely to enthusiastically support his departure so they can they vie for the premiership.

And what would happen if he did?

Public administration minister Renato Brunetta would take over as head of government temporarily as he’s the oldest cabinet minister. A general vote — due in 2023 — would be avoided if parties are able to agree on a new prime minister. That person would have to win a confidence vote in parliament to take office, and for Draghi to become president a consensus must be found on his successor. In any case, Draghi’s early departure from the government’s office could make investors nervous about the country’s ability to continue to receive about 200 billion euros ($230 billion) of EU funds. But installing him as president could also cement a longer-lasting anchor of stability at the heart of a fractious system that has often had about one prime minister a year since the war.

Why is Draghi’s name touted so widely?

Basically, no one matches his status and career. At 74, Draghi has served as European Central Bank chief and governor of the Bank of Italy. He’s widely respected at home, and abroad. But there are also political calculations at play because his departure could trigger a snap election that various parties could try to win.

Who else is in the running for president?

The list of possible contenders is long but few are expected to gain enough support to win. Former Prime Minister Silvio Berlusconi, 85, Italy’s longest-serving postwar premier, lobbied for the position for weeks, but on Saturday withdrew after it became clear he wouldn’t come out on top. Among potential candidates are Giuliano Amato, another former premier, and Justice Minister Marta Cartabia. Despite her standing and the political will to elect a woman, she wouldn’t have the full backing of the Five Star Movement — the biggest party in parliament, which opposed her justice reform plans. Others include Pier Ferdinando Casini, former head of Lower House, and Maria Elisabetta Alberti Casellati, current head of the Senate.

A new term for Mattarella, who appointed four different governments during his time in office, would be the easiest. Lawmakers would keep their posts until 2023, parties would avoid a political clash over his successor, and Draghi would have at least another year to push ahead with his reforms. But the 80-year-old president has repeatedly quashed speculation he could stay on, and is reported to have signed a contract to rent an apartment starting in January. Due to the length of the presidential mandate, a re-election is a rarity. In fact, it only happened once, when Giorgio Napolitano, Mattarella’s predecessor, remained in office for a partial term because parliament couldn’t agree on his replacement.