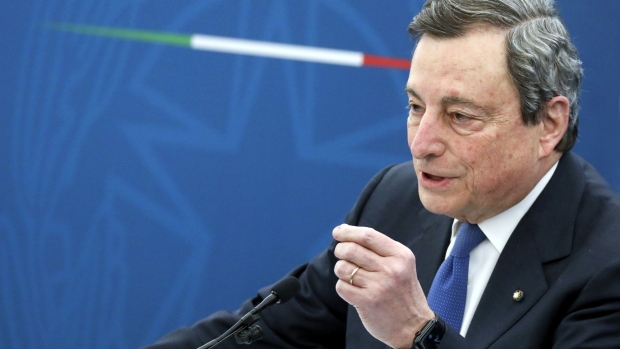 (Bloomberg) -- Italian Prime Minister Mario Draghi is set to abandon a project backed by his predecessor to create a single national fiber network controlled by Telecom Italia SpA, opposing a return to a phone industry monopoly.

Following a European Union request for the government to foster competition as it allocates funds from the bloc’s recovery plan, Rome will no longer support Telecom Italia’s plan to combine its land-line assets with networks run by state-owned rival Open Fiber SpA, according to people familiar with the matter. The Telecom Italia proposal would have kept the combined new operator under the ex-monopolist’s control.

Telecom Italia fell as much as 9.2% after the Bloomberg report on Thursday, their worst day in almost a year,and traded at 42 cents a share at 9:30 a.m. in Milan.

The Draghi government is intent on halting any project that would reverse two decades of deregulation and in effect allow Telecom Italia to kill off a competitor, albeit one under state control, the people said, asking not to be named discussing confidential deliberations.

Innovation Minister Vittorio Colao, a former chief executive officer at wireless carrier Vodafone Group PLC, also told Repubblica recently the government is committed to assuring “equity of access to fast internet connections and fair and open competition.” The state should be “an arbiter rather than a player” in the process, he said.

Cassa Depositi last week gained control of Open Fiber by buying an additional 10% from Enel, and now plans to accelerate its fiber roll-out and inject about 250 million euros ($300 million) into the company through a capital increase, according to people familiar with the matter.

Representatives for the government, Telecom Italia and Open Fiber declined to comment for this story.

The revised plan would see Open Fiber accelerate its internet services roll-out in rural areas, with the government encouraging competition for services in urban regions. Rome would also look to foster co-investment projects relying not just on fiber but also on ultra-fast mobile services such as 5G, the people said.

The government acknowledged recently that Italy lags behind European peers in “digital adoption and technological innovation,” particularly in rural areas, while the country ranks near the bottom among EU states in adopting new technologies.

“To boost the country’s broadband roll-out, the European Commission could leverage on wholesale-only carriers such as Open Fiber or Telecom Italia’s FiberCop, as they provide ultra-broadband services for all players granting equal access,” said Laura Rovizzi, chief executive at Open Gate Italia, a Rome-based strategy and regulation consultant that specializes in telecommunications. A clear commitment to an open playing field for digital services could also ease access to recovery plan funds, she said.

Telecom Italia Chief Executive Officer Luigi Gubitosi, with the backing of the previous government led by Giuseppe Conte, had pushed for an Open Fiber deal for months, insisting his company wouldn’t cede control of the proposed merged network.

That plan was the result of long negotiations between the Conte government, Telecom Italia and Cassa Depositi, which owns nearly 10% of Telecom Italia and about half of Open Fiber. Conte resigned in late January and was replaced by Draghi the following month.

Telecom Italia last year agreed to sell 37.5% of its land-line cables running from the street to premises -- the so-called secondary network -- to the infrastructure unit of investment firm KKR & Co. for 1.8 billion euros. Swisscom AG’s Fastweb SpA will hold 4.5% of the new network company, dubbed FiberCop, which will be a direct competitor of Open Fiber.