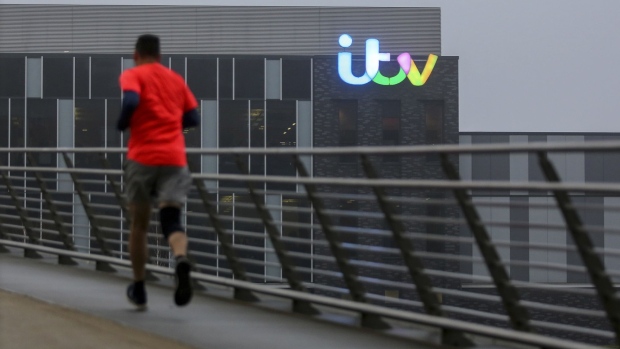 A runner heads over a footbridge in MediaCity in view of the ITV Plc studio building in Salford, near Manchester, U.K., on Wednesday, Feb. 5, 2020. U.K. Prime Minster Boris Johnson has spoken repeatedly about "leveling up" across the U.K. and the budget due in March is expected to include billions of pounds of new infrastructure projects to boost the economy of northern England, which has been hit by a decade of austerity and the decline of heavy industry. , Bloomberg

Ahead of next week’s COP26 climate talks in Scotland, the London-based company unveiled a raft of commitments beyond the 2030 environmental targets it announced last year. The COP26 summit has been billed as a make-or-break opportunity for world leaders to curb global warming.

ITV will add “climate action targets” into its executive bonus plans in 2022 and employees will receive “climate crisis training,” it said in an emailed statement Monday. ITV didn’t immediately elaborate on what the targets are.

The broadcaster will also try to persuade its audiences. Its studios will push a “behavior change campaign” across popular shows, according to the statement. Environmental issues will feature heavily in daytime television, news, factual and current affairs programming ahead of COP26, ITV said.

For instance, its biggest soaps Coronation Street and Emmerdale will reference climate change in crossover episodes which will also feature fictional characters from the rival British Broadcasting Corp.

Car giveaways on game shows will only feature electric or hybrid vehicles from the first quarter of 2022. Ways to take the broadcaster’s own fleet of cars electric are being reviewed.

ITV will also make compliance with 2030 emissions a requirement for future bank and debt capital market financing. That includes the group’s revolving credit facility, which is currently out to tender. It’s committed to cut scope 1 and 2 emissions by 46.2% and scope 3 by 28% before the end of the decade.

Sustainability conditions will be imposed on ITV’s suppliers. By 2025 the most environmentally risky suppliers will have to obey conditions to keep contracts, and by 2030 the rules will apply to its whole supply chain.